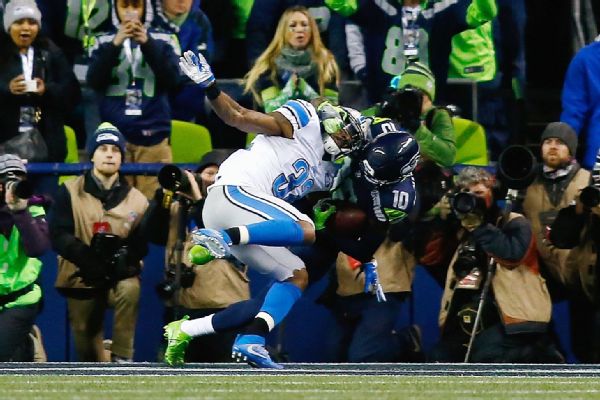 NFL referee Brad Allen and his crew erred on a crucial call in the first half of Saturday night's wild-card playoff game between the Lions and Seahawks, and it resulted in a fourth-down touchdown catch by Seattle receiver Paul Richardson.

On the play, which occurred with 7:07 remaining in the second quarter, Richardson caught a 2-yard pass from quarterback Russell Wilson. Replays showed that Richardson caught the ball with his left hand. With his right hand, he clearly grabbed and twisted the helmet of Lions defensive back Tavon Wilson.

Allen's crew had already called defensive pass interference on Wilson, which was declined. The crew should have also called a face mask penalty on Richardson. The penalties would have offset, and the fourth down would have been replayed.

In an off-camera halftime interview with NBC, Lions coach Jim Caldwell said he was told by an official that "they got it wrong."

Asked to elaborate following the Seahawks' 26-6 win, Caldwell replied, "I'm not going to go into all that. That's not why we lost the game, you know. Calls are calls. You've got to overcome 'em, and we gotta play better. We just didn't play well enough."

Wilson echoed this sentiment when asked for his take on the play.

"Whether I think it was a face mask or not don't matter," Wilson said. "They gave him a touchdown."

Allen, for his part, told a pool reporter that he was "not aware" of anyone on his staff informing Caldwell of the missed call.

Asked whether the play should have resulted in a face mask penalty, Allen replied, "First of all, that's not my coverage because my responsibility obviously is in the backfield with the quarterback.

"There were covering officials there who did not rule that there was a face mask on the play."

Richardson said he was "locked in on the ball" when pressed for details on the alleged face mask.

"All I know is I saw the ball in the air, I reached for it, I grabbed it, and we got six points," he said.

The NFL abandons regular-season crews for the playoffs and assigns officials based on regular-season grades. Saturday night's game was the first postseason game of Allen's career.

The Seahawks visit the Falcons in the next round.

ESPN's Michael Rothstein and Sheil Kapadia contributed to this report.

Paul Richardson makes spectacular TD catch with one hand in win
On fourth-and-goal, Russell Wilson tosses a pass into the end zone toward a heavily covered Paul Richardson, who manages to reach around a defender and secure a touchdown with one hand.