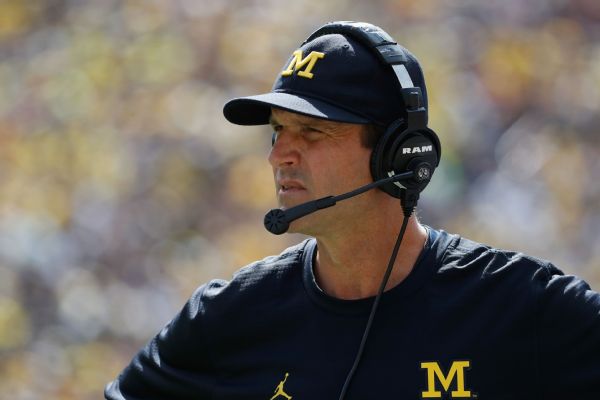 Michigan coach Jim Harbaugh supports the NCAA's proposed new limitations on satellite camps even though he said it "would take away a lot of fun."

On Wednesday, the NCAA Division I Council proposed limiting schools to 10 days of off-campus clinics and camps. Harbaugh has been the biggest proponent and frequenter of the satellite camps, as he and his staff worked at nearly 40 of them earlier this year in several states and two other countries.

"That would take away a lot of fun," Harbaugh said Thursday morning during an appearance on WXYT-FM in Detroit. "We did close to 50 last year, and that was a lot of fun. But, heck, if every school is doing 10, then that'd probably be more than what was done last year. So there's a possibility it's a really good thing, where everyone carries the water.

"The big thing is that football's being spread across the country, and youngsters are getting good coaching and have opportunities to show what they can do."

Under the previous rules, schools could participate in the off-campus clinics over two 15-day periods in June. The current proposal doesn't specify when the 10 days must take place, nor does it limit the number of camps that coaches can attend in one day.