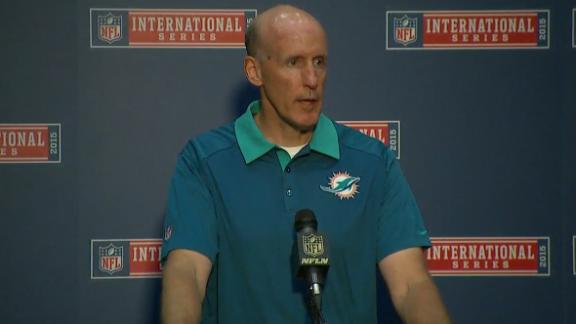 "No, not at all," Philbin told reporters in London after a 27-14 loss to the New York Jets at Wembley Stadium. "I'm worried about getting this team straightened out and fixed and getting our team ready to play the Tennessee Titans."

The Dolphins (1-3) have been outscored 91-48 during their losing streak.

Future meetings with the owner likely will happen during the upcoming bye week for Philbin when he returns to Florida. The Dolphins have looked ill-prepared and trailed at halftime in each of their four games. Miami also has been outscored 37-3 in first quarters this season, which is a poor reflection on the coaching staff.

"We still can't panic," Philbin said. "It all seems like the walls are closing in on you. We all realize that. So we gotta look at things and be honest about where we are, what we're doing well and what we're not doing well."

Philbin said he plans to keep defensive coordinator Kevin Coyle, who also is on the hot seat. There has been a growing disconnect between players and Coyle's defensive scheme, and Philbin confirmed Sunday that players met with Coyle this week to exchange ideas on what could work better.

"It wasn't contentious. We had a defensive meeting on Monday and we talked about things," Philbin said. "Players talked. Coaches talked. He met individually with different groups and got some feedback and some input."

And still, no change in performance. Miami allowed 425 total yards and a season-high 207 rushing yards against the Jets.