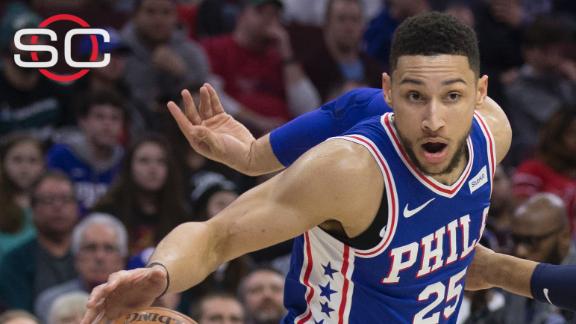 Simmons has been overlooked for an All-Star invite six times in recent weeks as players pulled out with injuries and NBA coaches and the league's commissioner, Adam Silver, instead went with veteran players as replacements.

"I hope they don't do the same bulls**t, the same mistake they've been doing before with the last two guys who got injured," Embiid told reporters after Simmons dropped an impressive 15 points, eight assists, six rebounds, three steals and a block in the 76ers' win over the Washington Wizards on Tuesday.

"I think he deserves it, he has been playing well the whole season, and he has been a beast lately."

Silver will select a replacement from Eastern Conference players and Simmons, who is putting up rookie numbers this season that place him alongside NBA greats Oscar Robertson and Magic Johnson, appears to be the likely choice.

If Simmons is selected he will become the first Australian to receive the honour and the first rookie since Blake Griffin in 2011.

It is rare for rookies to be named All-Stars with many NBA players, coaches and executives believing players need to prove themselves beyond one season.

Simmons scored the third-most fan votes among Eastern Conference guards but that was not enough for coaches and Silver to select him.

When injury ruled Wall out the commissioner chose Detroit Pistons centre Andre Drummond as his replacement.