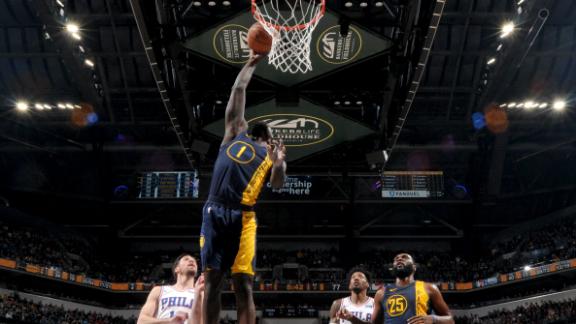 The Philadelphia 76ers didn't get the win Saturday night, but they did have something small to celebrate as star Joel Embiid played in both games of a back-to-back for the first time in his career.

Embiid finished with 24 points and 10 rebounds in the team's 100-92 road loss to the Indiana Pacers, logging 34 minutes a day after playing 31 minutes in a home win over the Miami Heat.

"I felt great," Embiid said after Saturday's game. "My legs weren't tired. My body was fine. I could feel it just a little bit. But I was fine."

With his team's most dynamic player now available to play in back-to-backs, Sixers coach Brett Brown is thrilled with the possibilities.

Embiid is averaging 23.6 points and 11.0 rebounds in his second season of active games. Drafted third overall by the 76ers in the 2014 draft, the start of Embiid's career was delayed by multiple injuries, and as a result, the team has been cautious in its approach to managing the 7-footer's minutes.

The 39 games Embiid has played in this season are the most he has played in any season, having participated in only 31 games last season in what counted as his rookie season.

Philadelphia next plays at home Tuesday night against the Wizards.