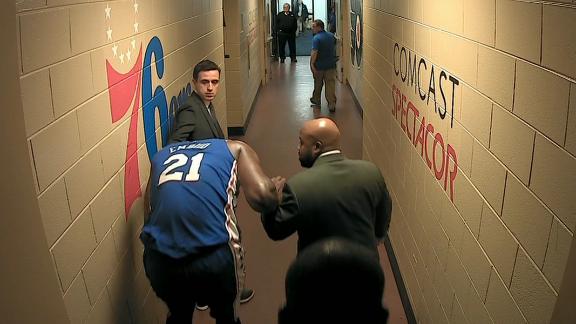 Philadelphia 76ers All-Star center Joel Embiidis slated to begin light cardio work this weekend as he begins the recovery process from the head injuries he suffered last week in a collision with teammate Markelle Fultz.

The Sixers released an update Friday on Embiid's recovery from a concussion and orbital fracture but said there is still no timetable for his return.

Embiid has been cleared of his concussion by an independent doctor, the Sixers said, but he still needs to complete the NBA's concussion protocol. The Sixers said doctors are pleased with how Embiid's orbital fracture is healing.

"Embiid underwent a post-operative examination by Dr. Jurij R. Bilyk and Dr. Howard Krein following successful surgery last Saturday to address the fractured orbital bone in his left eye," the 76ers said in a statement. "The surgeons were pleased with how the affected area is presenting to date and will determine when it is safe and medically advisable for Embiid to return to play."

The 7-foot center had surgery last Saturday to address the fracture to his left eye socket. He suffered the injuries March 28 in an on-court collision with Fultz during a Sixers' win over theNew York Knicks.

Doctors will evaluate his ability to return, and the Sixers plan to allow Embiid to return only if he's fully healed.

The Sixers have already clinched a spot in the playoffs. The regular season ends April 11, with the team's first playoff game on April 14 or 15.