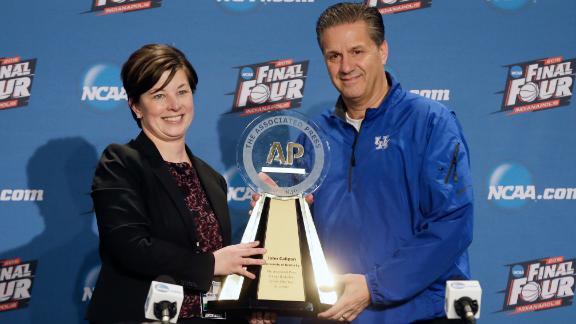 Kentuckycoach John Calipari will be elected to the Naismith Memorial Basketball Hall of Fame while Wisconsincoach Bo Ryan did not receive enough votes to get in, sources told ESPN.com on Sunday.

A source told ESPN.com that it was extremely close with Calipari reaching the 18 votes necessary to get in. An official announcement is expected Monday morning in Indianapolis.


Calipari, 56, has taken three different college programs to the Final Four. He took UMass in 1996 and Memphis in 2008, although both were later vacated by the NCAA. He has also taken Kentucky to the Final Four four times in the past five years -- and won the national title in 2012.


He also coached in the NBA for three seasons with the New Jersey Nets.


The other 10 finalists waiting to hear if they've been induced into the Hall of Fame include former NBA big man Dikembe Mutombo as well as Tim Hardaway, Spencer Haywood, Kevin Johnson, Lisa Leslie and Jojo White. Coaches Leta Andrews, Bill Fitch and Robert Hughes and referee Dick Bavetta also are among the finalists.


Candidates need at least 18 of 24 votes from the Honors committee to be inducted into the Hall of Fame. The enshrinement ceremony is Sept. 11 in Springfield, Massachusetts.