John Calipari: 'We could lose 7 guys' 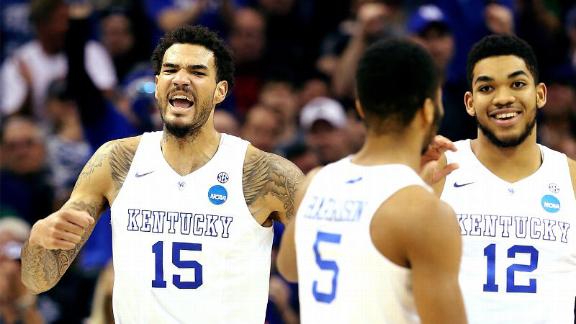 Kentuckycoach John Calipari knows it's only a matter of time before his players seek success at the next level, and he expects five to seven players to make the jump to the NBA this offseason.


"There's not going to be any brainwashing, forcing, pushing either in or out," Calipari told reporters in Indianapolis on Monday after his election to the Basketball Hall of Fame. "I want each kid to make a decision for themselves.

"I did tell a couple of the kids that it's a man's league; it's not a child's league. If you're not ready for a man's league, you need to come back."


The Wildcats are coming off a 38-1 season, losing to Wisconsin in the national semifinals on Saturday.


"We could lose seven guys," Calipari said. "I would guess five at the minimum. But I would say seven is a distinct possibility."


Calipari projects thatWillie Cauley-Stein, Andrew Harrison, Aaron Harrison, Karl-Anthony Towns and Trey Lyles will declare for the NBA draft. He's not so sure about Dakari Johnson and Devin Booker.


"It's time to take another step," Cauley-Stein told reporters after the Wildcats' loss to Wisconsin. "I mean, obviously, I'm not 100 percent on it, but I'm pretty sure I know what I want to do. Gotta talk to a couple more people, but probably was my last game here.


"... You know, we'll never be on the same team like this again.That's going to set in. We got a month of school left with each other, and that's it. I mean, that's what you'll remember."


The 6-foot-11 Towns, who averaged 10.3 points and 6.7 rebounds this season, is ranked as the No. 1 NBA draft prospect by ESPN NBA Insider Chad Ford. Cauley-Stein is ranked No. 7, while Lyles (18th), Booker (19th) and Johnson (38th) also are projected as possible first-round picks.


"I hope they surprise me like they did last year," Calipari told reporters.


Cauley-Stein, the Harrison twins and Alex Poythress, who suffered a season-ending ACL injury in December, all returned after last year's loss to UConn in the national title game.


"I'm going to explore for Alex," Calipari said. "My guess is the injury probably will influence him to come back. But if someone says they'll take him 15, 16 in the draft, then that may change."


The Harrison twins didn'toffer any hints about their futures after the loss to the Badgers.


"I'm not even thinking about that right now," Aaron Harrison said. "I think I've got to take some time because you can't make the right decision from emotion."


Said Lyles:"Those are decisions I haven't even thought about."

Possibly five players leaving Kentucky
Kentucky coach John Calipari speaks on the possibility of some of his players entering the upcoming NBA draft.