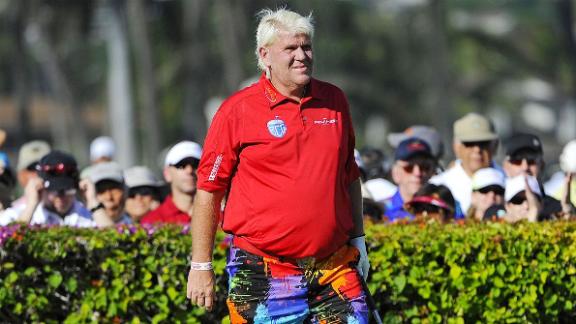 His rant began when he was asked on SiriusXM's "Hit It Hard with John Daly" whether drug testing on the PGA Tour was random.

"Wait, you're telling me you already know you're gonna get tested?" Meagher replied.

"Oh yeah, this'll be the fifth or sixth year in a row I'm going to get drug tested [at this event]," said Daly, who is scheduled to play the Valspar Championship this weekend. "It's the biggest bulls---, I'm sorry, I'm gonna say it, fine me. I don't care what you do, fix 'em right now, fine me, but I'm tired of it.

"It's not random; it's big a joke. This whole drug testing is a joke."

Daly went on to say, "I'm pissed 'cause I know I'm going to get drug tested no matter where I go."

"I'm actually defending all the golfers in this tournament," he continued. "But I'm so sick of it being 'random.' It's not random."

Daly called out PGA Tour commissioner Tim Finchem and chief of operations Andy Pazder in particular, saying, "Andy Pazder, if you listen to this show, you and Tim Finchem get off your ass and get it right. You know, I'm tired of it. Because it has to be random; this is bulls---. And I'm sorry, fine me, I don't care what you do, fine me, but do it randomly."

ESPN.com asked the PGA Tour for comment late Tuesday night, but officials had not yet responded.

Daly's chief complaint was the predictability of the drug testing.

"Like Major League Baseball and NFL take it seriously," Daly said. "[The PGA Tour thinks] it's a joke."

A PGA Tour veteran and multiple tournament winner not only verified John Daly's statements but went a step further.

"You would be surprised how many guys are tested more often [than others]. I refer to this group as the 'safe' guys. We get tested often because we are clean, and it makes testing look frequent and thorough. Total facade. They don't test 'big iffy' guys often at all. Never out of competition either. Testing Daly may seem thorough, but nobody has ever thought he's done anything illegal. Only alcohol, and that's not illegal. ... It is a joke, as JD said. No transparency."

If these allegations prove to be true, the ramifications for the PGA Tour and the Olympics could be devastating.

Daly is scheduled to tee off Thursday at 9:05 a.m. ET off the first tee with Andres Romero and Jeff Overton.