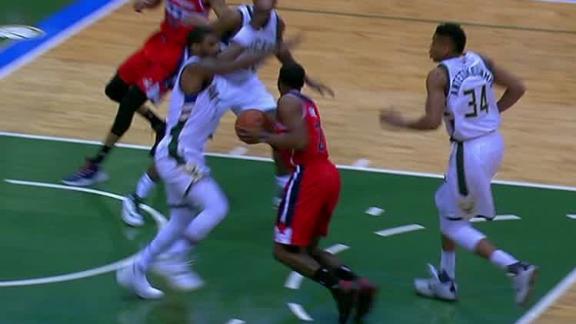 Washington Wizards guard John Wall said he wasn't sure if he'd be able to play in Sunday's All-Star Game after suffering a bruised right knee in Thursday's99-92 loss to the Milwaukee Bucks.

Wall said he suffered the injury in the first quarter when he collided with Bucks guard O.J. Mayo. He stayed in the game and received treatment on his knee at halftime and after the game, according to the Washington Post.

"If I can't move and I need more time then I won't [play Sunday]," Wall told the Post. "But it'll be frustrating not to.

"It's a deep bruise. As you can see, it's swollen. It hurts, and I'll do as much treatment as I can on it."

Wall played 42 minutes Friday despite the injury, scoring 15 points on 5-of-19 shooting.

Wall, who was limping in the locker room after the game, took the blame for Friday's loss, telling the Post that the knee injury limited his movement, causing him to take 12 3-point attempts, of which he made only three.

"I just knew how important this game was, trying to get a game before the break," Wall told the Post. "It's an honor to be in the All-Star Game and have the opportunity to play, but I can't do it if it's still a problem. My team is too important."

The loss dropped the Wizards to 23-28, three games behind the Charlotte Hornets for the eighth seed in the Eastern Conference.

A five-year veteran, Wall earned his third All-Star selection this season. He is averaging 20.1 points and 9.9 assists per game.