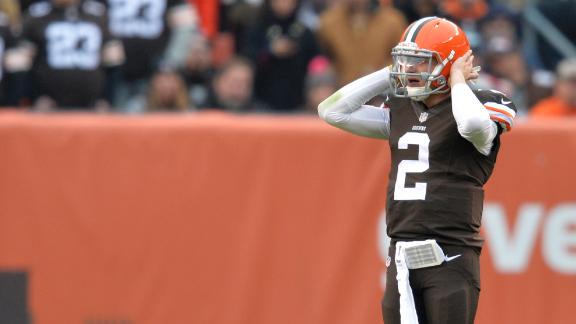 BEREA, Ohio -- Johnny Manziel, looking back on what he called an "absolutely" humbling day, said his NFL starting debut was the worst game of his career, at any level.

The Browns ran an NFL season-low 38 offensive plays in a 30-0 loss Sunday to the Cincinnati Bengals, with Manziel throwing for just 80 yards and two interceptions. The last first-time starter whose offense failed to score a point was Tennessee's Rusty Smith in 2010.

"First time I've ever not scored a point or been shut out," Manziel said. "Played in a lot of games, through high school and through college. Never been shut out, so it's definitely tough."

In the days leading up to the game, Manziel's first start seemed to energize Browns fans, coaches and players. Fans flashed money signs before the game. The Browns were hoping to inject life into one last playoff push.

But Manziel got minimal help from the rest of the offense and looked indecisive making throws downfield. Manziel called the performance "a little bit of an off day."

The Browns' offense was on the field for less than 21 minutes Sunday. The lack of chances disrupted Manziel's rhythm, he said.

"You don't really envision that in your head," Manziel said. "I left some throws on the field I would have wanted back. ... I felt like I could do everything I needed to from the pocket yesterday. Whenever I did have the chance to break the pocket, I felt some things happened where we weren't able to capitalize on."

Manziel thought the offense showed flashes of progress on the field but admitted there isn't much from a 30-0 game "that will make you pump your fist."

Coach Mike Pettine agreed on the flashes, emphasizing the Browns played poorly around the rookie instead of rallying behind him.

When asked whether Manziel still gives the Browns the best chance to win, Pettine said Manziel "gives us an opportunity to win," but also said those solely blaming the quarterback should look closer.

Manziel's been "quite productive" in practices, Pettine said, but the Browns held off playing Manziel earlier because of the unpredictability of a rookie.

Pettine knows people will make wide-ranging conclusions about Manziel's outlook, fair or not.

"It's very unfair to judge what somebody's career is going to look like off their first NFL start," Pettine said.

Manziel will have his critics. Analyst Merril Hoge said Sunday morning on ESPN that Manziel had first-round hype and sixth-round talent.

Manziel said it's "very well-known that he's not a big fan of mine" but knows people can have their opinions.

"To me, I'm not really listening to the outside noise," Manziel said. "I know I need to play better. If I don't, then people will continue to say things like that."

Manziel Flops In Starting Debut
Johnny Manziel threw for 80 yards and two interceptions while Jeremy Hill rushed for 148 yards and two touchdowns in the Bengals' 30-0 win over the Browns.