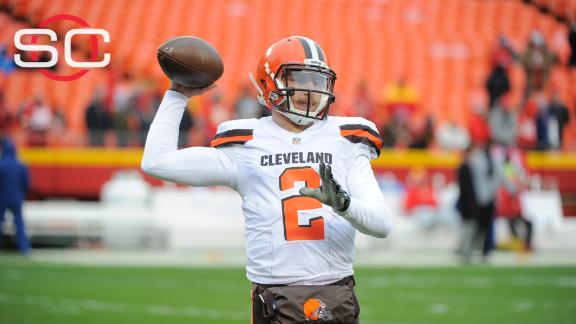 ESPN
By Pat McManamon
Cleveland Browns coach Mike Pettine says he will have a conversation with Johnny Manziel after another social media video of the quarterback surfaced Sunday night.

The video, which appeared on Busted Coverage, shows Manziel singing along to "March Madness" by Future in a private residence. A Tampa Bay Buccaneers jersey of Mike Evans, Manziel's Texas A&M teammate, hangs on the wall.

"Any time there's something with our players that casts them potentially in a bad light, whether it's Johnny or any of our other guys, it's certainly a concern," Pettine said Monday before he had seen the video. "I'm sure I'll see it and have a discussion with him about it.

"These circumstances are different from the incident that occurred before. I'm just not going to go into a ton of detail with it until I get a little bit more information about it, but it's something that I'm sure privately we'll discuss if it needs to be discussed."

Pettine is expected to talk to media again on Wednesday.

In November, a similar video appeared of Manziel partying and singing the same song in Austin, Texas, during the Browns' bye week. Manziel lost the starting quarterback job when that video appeared and when he lied to the coaches about when it was filmed.

Manziel spent 10 weeks in rehab after his January check-in. How alcohol figures into his post-rehab treatment program is not known, nor is the specific reason Manziel went for treatment.

Pettine was asked Monday where the team is with Manziel being public about drinking.

"It falls back into not micromanaging personal lives," Pettine said. "It's very public, unfortunately. The thing that's disappointing is how public it becomes. And it's something that, with all of our players, we're going to sit down with them before they get out of here and talk about where they are personally, where they are professionally. And certainly Johnny will be no exception."

Pettine would not comment on the possibility this video could lead to another demotion for Manziel, but his tenor did not indicate it was likely.

In discussing Manziel's on-field play and practice work, Pettine stressed that Manziel has been professional with the team.