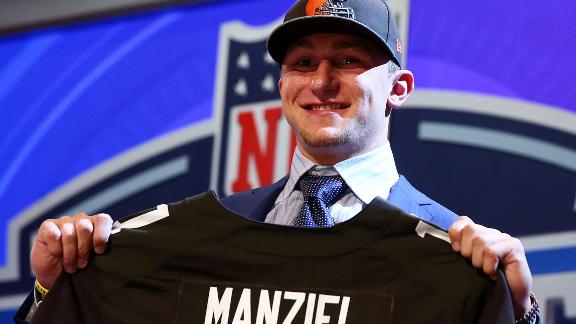 So many No. 2 Cleveland Browns jerseys with Johnny Manziel's name on them have been sold since he was drafted Thursday night that the rookie quarterback has the best-selling jersey on NFLShop.com since April 1, topping the likes of Russell Wilson, Peyton Manning and Colin Kaepernick.

When Manziel jerseys went on sale at FirstEnergy Stadium in Cleveland at 11 a.m. ET Friday, there was a line outside the team shop. Even LeBron James, whose business partner Maverick Carter works with Manziel, had a Manziel jersey on during the Miami Heat's flight to New York on Friday.

Nike, which has an endorsement deal with Manziel and is also the league's official uniform supplier, is offering Manziel jerseys in every version and size. The company has also made special Manziel Browns shirts that read "Johnny Football" and "Manziel or Nothing" and a women's shirt that says "My Manziel."

The second-most popular jersey among rookies has been that of Michael Sam, the first openly gay player ever to be drafted, despite the fact Sam jerseys weren't available until 9 p.m. ET Saturday. Sam, who played at Missouri, was picked in the seventh round by the St. Louis Rams.

"We think this is a sign of what we've been saying all along, that Michael's inclusion in the NFL is bringing fans into the game who weren't previously consumers of the NFL game," said his agent, Cameron Weiss.

Rounding out the top five for rookies: Texans defensive end Jadeveon Clowney, who was picked first overall, Vikings quarterback Teddy Bridgewater, who was taken as the last pick of the first round, and Jacksonville's Blake Bortles, the first quarterback taken, at No. 3 overall.

Manziel Jerseys Are NFL's Most Popular
Darren Rovell discusses the appeal of Johnny Manziel's jersey and how it quickly became the NFL's top-seller.