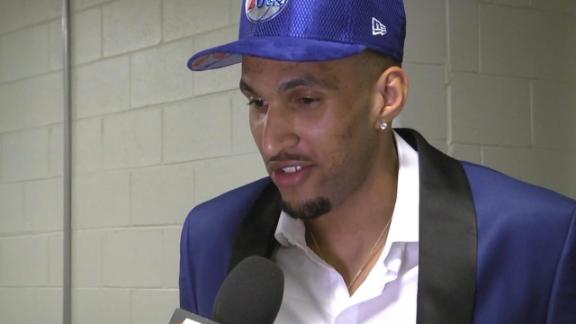 Brooklyn, N.Y. - The Philadelphia 76ers will have a distinct Australian flavour next season after drafting Jonah Bolden with pick No. 36 in the NBA draft. Bolden, whose gamble in leaving college early to play professionally in Serbia paid off, will join his fellow Australian Ben Simmons with the 76ers, to be coached by former NBL coach, Brett Brown.

"They say "Trust the process", Bolden said moments after being drafted.

"For me, the whole journey has been a process from day one."

Bolden's journey to the NBA hasn't been linear. He left prestigious NCAA program UCLA after two seasons, when he believed that he wasn't developing at an ideal rate, and signed to play in Serbia for FMP Belgrade. He attributes the growth in his game to playing in Belgrade, saying he "matured as a man" and "focused a lot on my weaknesses and improving them".

Bolden enhanced his reputation while playing in Serbia, rising from an unknown commodity to being projected as a late second-round pick. By the time Bolden arrived in New York earlier this week, teams had become more intrigued with his unique skill set -- a perfect fit for the modern NBA, where Bolden envisions himself splitting time at both small and power forward.

"I believe I'm a versatile forward," he said. "To me 3 and 4 nowadays in the NBA is kind of a mix between the two, and I feel I can play 3 or 4, both offensively and defensively."

Bolden recently signed a two-year deal with Serbian powerhouse Red Star Belgrade, leading to speculation that he may be drafted and the 'stashed' in Europe to develop further. He squashed that notion, saying he intends to be an NBA player next season.

Standing 6'10 with a 7'4 wingspan, Bolden gives Philadelphia yet another versatile weapon to team with Simmons, Joel Embiid, Dario Saric, and the team's No. 1 overall draft pick on Thursday, Markelle Fultz.

Bolden believes his game will be a natural fit for the style of game the 76ers intend to play.

"With Ben being able to create off the rebound, Markelle brings it up and creates. We've just got a long team, and I feel like I'll fit well. Coach Brown is great at also giving his players freedom and believing in their abilities to play within in that system."

Bolden becomes the latest son of a former NBL star to be drafted, following in the footsteps of Dante Exum in 2014, and Simmons last year. Bolden's father, Bruce, played 17 years in Australia.

Having Simmons as a teammate, and Brown, who coached for 17 years in Australia, as head coach, Bolden is confident he will make a smooth transition to the NBA.

"Having an Australian coach, having Australian teammates definitely helps [adjustment to NBA]," Bolden said after being drafted.

"You know, I just know I can approach them off the court and know I can speak to them on a daily basis about anything. I know that coming from Australia, we all have each other's backs, so that definitely helps."

Bolden bought NBA League Pass on his third day in Serbia, wanting to keep up with the 76ers, and Simmons in particular, as he was enamored with the style of play Brown had them playing. Now he gets his chance to run with the team. Once he does, Bolden's journey will be complete.

"Leaving Australia to play high school over here, going to two different high schools, then two years at UCLA, then going professional. So for me, it's just been a whole process and I'm grateful for it, but I definitely believe in trusting the process.