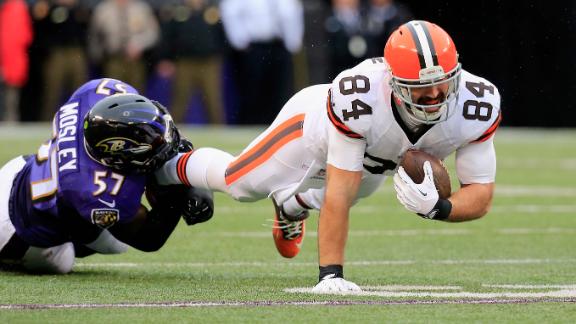 The deal capped a wild day for Cameron that began with a visit to Miami, and later reports that he had re-signed with his former team, the Cleveland Browns.

However, Cameron signed with Miami and will join a Dolphins team that finished 8-8 last year and has a 4,000-yard quarterback in Ryan Tannehill.

"I am pleased to announce that the Miami Dolphins have come to an agreement with Jordan Cameron," Dolphins general manager Dennis Hickey said. "He is a young, proven Pro Bowl performer with playmaking ability that will positively impact our team."

Cameron had his best year in 2013 when he caught 80 receptions. Last season, Cameron missed five games due to concussion issues and one with a shoulder injury.

The Dolphins still have the transition tag on tight end Charles Clay, who is free to negotiate with other teams. Miami also can rescind the tag at any time.

Cameron's big plays in 2014 showed what he brings to a team. When healthy, the 26-year-old is a talented player with unique skills for the tight end position.

He led all NFL tight ends with four receptions of longer than 40 yards, including touchdowns of 81 and 51 yards. Only two other tight ends in the past 13 seasons had more than four plays of 40 yards or more in a season.