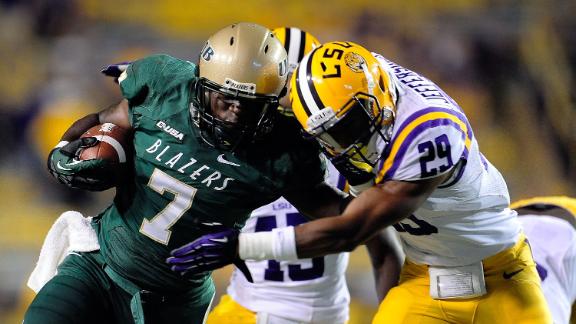 ESPN
By Josh Moyer
Former UAB running back Jordan Howard, who's ranked within the top 10 nationally in rushing, has signed a financial aid agreement with Indiana.

Because the UAB program is shutting down, the sophomore will be eligible to play immediately.

"There was something about Indiana I just liked," Howard told ESPN.com. "And it was big with them having a 2,000-yard running back the previous year and most of the offense coming back."

Wilson visited with Howard on Tuesday, and Howard said that's when he committed. Indiana was the first school to reach out to Howard, via Twitter, and Howard said he eventually trimmed his choices down to Vanderbilt and IU.

"I'm not here to replace Tevin Coleman's production," Howard said. "I'm here to do the best I can."

Howard, an Alabama native, rushed for 1,587 yards and 13 touchdowns this season. In 2013, he set the UAB single-season freshman record with 881 rushing yards.

"We recruited him very, very hard and we are excited he is joining us," Wilson said in a news release. "The sign of a good program is finding good players to replace good players, and we have done just that."