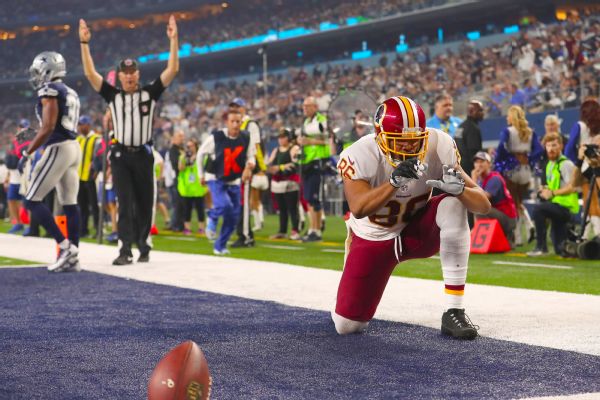 DALLAS -- Washington Redskins tight end Jordan Reed said doctors told him he probably wouldn't be able to keep playing. But Reed knew the difference he could make in the game, and despite having an AC joint separation in his shoulder, he decided to return.

Reed suffered the injury early in the second quarter of Washington's 31-26 loss to the Dallas Cowboyson Thursday, falling hard on his left shoulder after jumping for a pass in the end zone that he couldn't catch. He missed the rest of the quarter and was told at halftime that he probably wouldn't be able to return.

But after catching passes before the second half began from backup quarterback Colt McCoy -- both high and low throws -- Reed felt he could still play.

"I didn't think he'd come back in, but he came back in and made gigantic plays for us," Redskins coach Jay Gruden said.

"It's pretty severe pain," Reed said. "I noticed it the whole time. I just kind of grinded it out and kept praying. I was able to fight through it."

The pain was evident on Reed's face as he tried to dress after the game, with his shoulder slightly disfigured from the injury and his eyes watering at times because of the pain. But Reed managed to catch a game-high 10 passes for 95 yards and two touchdowns -- with eight catches, 80 yards and both scores coming after the injury. He made a diving, one-handed 33-yard reception that set up one touchdown.

"I know it was pretty painful for him," Redskins tight end Vernon Davis said. "When I walked in after the game, he was in so much pain I could feel it. For him to come out there and play the way he did ... it was amazing, it was beautiful."

Reed has a history of getting hurt. He hasn't played a full 16-game season in his career. He missed 12 games combined his first two seasons and two more last year. He's already missed two games because of injuries this season. But what happened Thursday might have kept Reed out in his first or second year.

"It has a lot to do with my maturity," said Reed, who has caught a team-best 59 passes this season with five touchdowns. "I've grown in how my teammates look at me and the faith they have in me that I could come through in certain situations. When I'm not out there, I feel like I'm letting them down. I don't like to miss time."
Related topics:
sportsespnwashington redskinsjordan reednflac joint separationshoulder
Copyright © 2022 ESPN Internet Ventures. All rights reserved.
TOP STORIES
Off-duty corrections officer robbed, carjacked in Philadelphia
2 shot dead after trying to break into South Philly home: Police
At least 46 bodies found in 18-wheeler in San Antonio
2 states battle abortion trigger laws; pharmacies limit Plan B sales
AccuWeather: Bright, less humid the next few days
Jan. 6 panel to hold surprise hearing, present new evidence
Long-term plan for Navy Yard to be unveiled today
Show More
AAA projects record-breaking holiday travel, gas prices
3 dead, at least 50 injured after Amtrak train derails in Missouri
11-year-old girl in South Jersey dreams of playing in the MLB
Man who allegedly shot driver following crash found guilty by judge
How overturn of Roe v. Wade could transform political landscape in Pa.
More TOP STORIES News