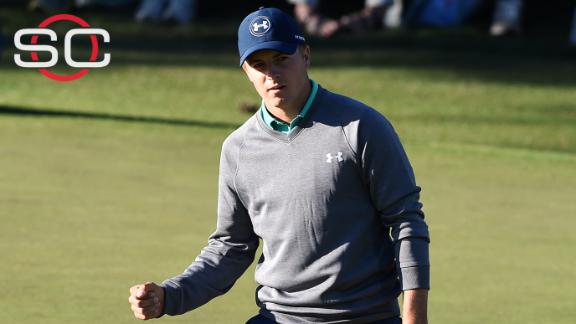 AUGUSTA, Ga. -- One round away from another green jacket, Jordan Spieth couldn't help but look back.

A victory in the Masters was starting to look inevitable Saturday, when Spieth stood on the 17th tee with a 4-shot lead. The wind that caused so much havoc had subsided. Rory McIlroy was out of the picture. Spieth had just made five big putts in a row, three of them for birdie.

Two holes later, he found himself explaining what went wrong.

Sure, he had the lead for the seventh straight round at Augusta National -- but just barely. Two wild tee shots, two poor wedges and five putts at the end of an already wild ride left Spieth with a 1-shot lead and The Masters up for grabs.

"It was a really tough finish to go from holding a 4-shot lead ... to where all of a sudden, now it's anyone's game," Spieth said. "So it's tough to swallow that."

"Understand this is the position I wanted to be in after 54 holes," he said, "and not think about the finish to today's round."

A bogey and a double-bogey gave Spieth a 1-over 73, which put him one shot ahead of Masters rookie Smylie Kaufman. It also gave plenty of hope to a cast of challengers that includes 58-year-old Bernhard Langer and Japan'sHideki Matsuyama, who were two shots behind.

Looming three shots back -- that's nothing at Augusta National -- were world No. 1 Jason Day and Dustin Johnson. Eleven players were within five shots of the lead, and that included McIlroy, who didn't make a birdie in his round of 77.

"To be honest with you, I would be feeling a lot worse about myself if I hadn't have just seen what Jordan did the last two holes," McIlroy said. "I sort of take a bit of heart from that, that I'm still in this golf tournament."

That's what gnawed at Spieth. He led by four shots after the third round a year ago and was able to protect the lead. With a forecast for less wind Sunday, it could be a sprint to the green jacket filled with birdies, eagles and those Augusta National roars that have been largely swept away by three straight days of 25 mph gusts.

"I know I have to shoot a significant under-par round tomorrow in order to win this tournament, when I could have played a different style of golf, like I did on Sunday last year," he said.

Kaufman, who qualified for the Masters by shooting 61 in the final round to win in Las Vegas, used to spend his summers playing junior golf against Spieth. He kept the stress to a minimum and rallied with three birdies over his last six holes for a 69.

No one has won a green jacket on his first try since Fuzzy Zoeller in 1979. Maybe there's one waiting for a 24-year-old named Smylie.

"This place fits my eye pretty well," Kaufman said. "I just enjoy playing, coming out every day. It's Augusta National. It's hard not to have some fun out there."

The biggest surprise has been Langer, who won his second Masters about three months before Spieth was born in 1993. Playing alongside Day -- and usually from some 60 yards behind him -- Langer plodded his way around in the wind and ran off three birdies for a 70.

On the 30-year anniversary of Jack Nicklaus becoming the oldest Masters champion at 46, Langer has a chance to become the oldest winner of any major by 10 years. Julius Boros won the 1968 PGA Championship when he was 48.

"I believe I can," Langer said.

Matsuyama, who won the Phoenix Open earlier this year, had a brief chance to tie Spieth until he missed a birdie chance on the par-5 15th. Just like Spieth, he let the last few holes get away from him with bogeys on the 16th and 17th for a 72, but he was only two shots behind.

Day (70) and Johnson (72) were at even-par 216, along with Danny Willett, the Englishman who wasn't sure he was going to be able to play in his first Masters because his wife was pregnant. She gave birth last week.

Almost as surprising as Langer's being two shots behind is McIlroy's still having a chance. After starting the round one shot out of the lead, he fell apart after the turn with a bogey from the trees on No. 10 and a double-bogey in the water on the 11th.

Spieth also made double-bogey at No. 11 but was able to recover. The lead was down to one shot, until he made an 18-foot birdie on the par-3 12th, then holed fast, sliding birdie putts on the 14th and 15th to restore his margin.

Three holes later, it was gone.

Spieth in the lead heading into Sunday
Jordan Spieth was leading by four shots with two holes to play when he hit two wild tee shots and two poor wedges that led to a bogey and double-bogey for a 1-over 73. Spieth maintains a 1-shot lead heading into the fourth round of The Masters.
Related topics:
sportsespngolfrory mcilroydanny willettbernhard langerjason daymastersjordan spiethaugustahideki matsuyamadustin johnsonsmylie kaufman
Copyright © 2020 ESPN Internet Ventures. All rights reserved.
More Videos
From CNN Newsource affiliates
TOP STORIES