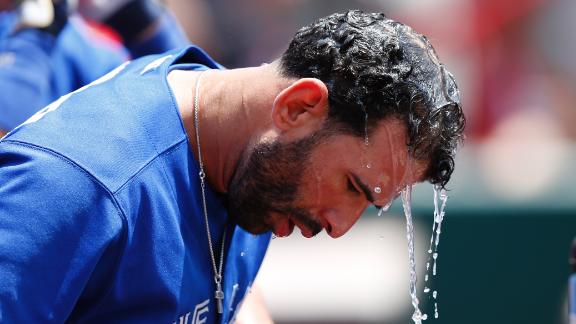 Lawrie left the game at Cincinnati in the middle of the second inning with a broken right index finger after being hit by a pitch. He was replaced by Steve Tolleson.

Tolleson moved to right field and Munenori Kawasaki from shortstop to second for the bottom of the third after Jose Bautista left the game with tightness in his left leg in the top of the third.

But before he left he had a sacrifice bunt that set up Colby Rasmus' two-run single, giving the Blue Jays a 2-1 lead.

Jose Reyes, who left Saturday's game after fouling a ball off the side of his left knee, pinch-ran for Bautista, who had reached on an error, and stayed in the game to play shortstop.

Bautista has been scheduled for an MRI on Monday.