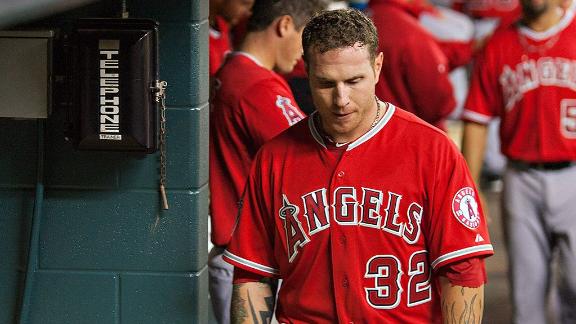 The Los Angeles Times earlier reported the meeting between Hamilton and the league.

"I can say that Josh is going to meet with league officials in New York," Angels general manager Jerry Dipoto told the newspaper. "At this point I have no other information to offer."

Hamilton, who underwent shoulder surgery earlier this month and is expected to be out until at least May, has not been with the team at spring training in Arizona. The Angels have permitted Hamilton to stay at a friend's house in Houston while he rehabs from the surgery, even though players typically stay with their teams in those situations.

Hamilton was suspended from baseball from February 2004 to June 2006 for issues related to cocaine and alcohol addiction. One of the conditions of his reinstatement was that he undergo drug testing three times a week. He had alcohol relapses in 2009 and 2012, bouncing back in between to make back-to-back trips to the World Series with the Rangers and win the 2010 American League MVP award.

He also took off the 2003 season, citing personal reasons. He did not play professional baseball from July 2002 to July 2006.

Hamilton signed a five-year, $125 million deal with the Angels prior to the 2013 season.