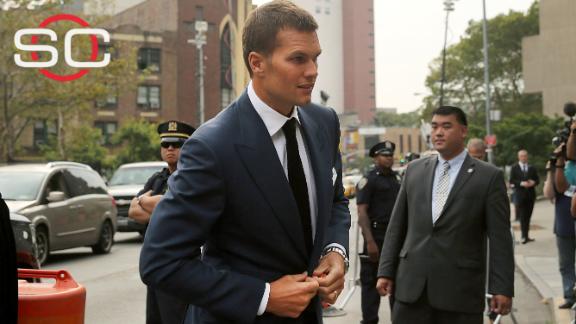 Tom Bradyand NFL commissioner Roger Goodell have failed to reach a settlement in the quarterback's appeal of his four-game suspension for his involvement in the Deflategate scandal.

U.S. District Court Judge Richard M. Berman announced Monday that the sides will not settle the case, saying he will announce a ruling as early as Tuesday and no later than Friday.

"It won't be today, but hopefully tomorrow or the day after," said Berman, who stated that he is putting the final touches on his decision.

Speaking at a hearing that lasted less than five minutes, Berman noted that senior executives from the league and the NFL Players Association who had not attended several previous settlement talks joined more than an hour of negotiations Monday morning.

Mara left the courtroom prior to Berman's announcement and told ESPN's Sal Paolantonio, "There's not going to be a settlement, as far as I know."

Outside court, Feely said the sides tried their best for a settlement.

"We want to thank the court," Feely said. "We tried our best to reach a settlement that we did not reach. But I think for us, it reinforces the desire and need for an independent arbitrator in these matters of personal conduct. But we understand Tom's position, and I think the process will work itself out."

Berman said he had "no qualms" about the willingness of both sides to try to reach a settlement in the controversy that has hung over the NFL since Brady and the New England Patriots easily defeated the Indianapolis Colts in the AFC Championship Game in January.

Goodell upheld Brady's suspension in July after an appeal, and the NFL wants confirmation that it handled the case appropriately. Brady wants the suspension nullified and repeatedly has disputed the league's ruling that he and Patriots equipment staff colluded to deflate footballs before New England's 45-7 victory over Indianapolis.

A ruling this week by Berman would give Brady enough time to prepare in case he can start New England's regular-season opener against Pittsburgh on Sept. 10.

Berman had ordered Brady and Goodell to attend Monday's hearing. Both arrived 90 minutes early to participate in talks in the judge's robing room.

Berman has said a settlement would be "rational and logical" but also cited weaknesses in the way the NFL handled the controversy. The judge has also suggested that the league's finding was too vague, that Brady was generally aware that game balls were being deflated.

At a court hearing this month, Berman told the NFL there was precedent for judges to toss out penalties issued by arbitrators.

ESPN's Sal Paolantonio and The Associated Press contributed to this report.