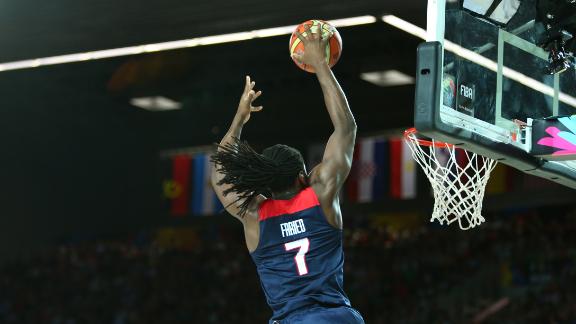 BILBAO, Spain -- Kenneth Faried kept up his sharp shooting with 16 points and the U.S. national team rolled to a 4-0 start with a 106-71 victory over the Dominican Republic on Wednesday night.

The Americans surpassed 100 points for the second time in the tournament -- and they were "held'' to 98 points in their other two games.

They led by only three points after one quarter but had no trouble extending that as the game went on, as the Dominicans' willingness to push the pace simply played into the Americans' hands.

Faried made 8 of 11 shots, a 73-percent clip that actually lowered his percentage for the tournament after the Denver forward came into the game hitting 81 percent.

The Americans will finish Group C play Thursday against Ukraine before playing their round of 16 game Saturday night against the fourth-place team from Group D, which is still to be determined. The Dominican Republic (2-2) will face Turkey on Thursday, still in position to advance.

The Dominicans played without Houston Rockets forward Francisco Garcia, who entered the day's play tied for fourth in the tournament with 21 points per game. He appeared to turn an ankle late in the Dominicans' victory over Finland on Tuesday, and though he finished the game, was walking gingerly Wednesday as he went to the bench after his teammates had come out to warm up.

The Americans ended up winning nearly as easily as their 105-62 exhibition victory on Aug. 20 in New York, though the Dominicans hung with them a little longer than that night.

The U.S. lead was just 25-22 as the Dominicans attacked fearlessly but didn't have any answer for the Americans' bigs. Faried had three straight baskets, a couple of them powerful dunks, and Anthony Davis knocked down a jumper to turn a seven-point lead into a 44-29 cushion.

Gay got the final four points of the half, making a pair of free throws after he was clobbered intentionally on a breakaway by Edward Santana, then banking in a jumper that make it 56-41.

A 25-point third quarter was followed by 25 more in the fourth, capped by a series of dunks from end-of-the-bench players Andre Drummond and Mason Plumlee.