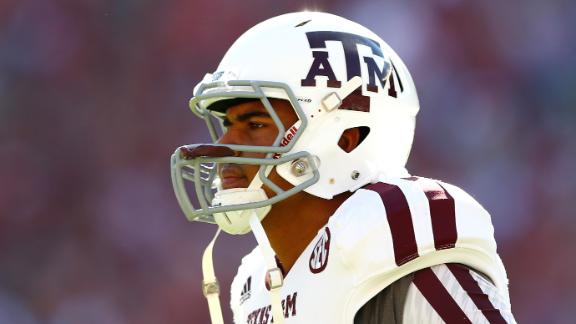 Hill, who started the Aggies' first eight games this season, was replaced by true freshman Kyle Allenas the starter in the Aggies' 21-16 win over Louisiana-Monroe on Saturday.

"It's always disappointing whenever it's any player," Sumlin said. "What we try to do is hold players to certain standards in this program and if you don't meet those standards, there are consequences. Unfortunately, this is one of those times."

Offensive coordinator Jake Spavital made it clear that Allen won the right to start with his play in practice over the last two weeks, not because of Hill's suspension.

"Where we're at right now, we're looking for the best guys to put out there and to go out there and compete, and he definitely earned the starting position," Spavital said.

It has been a year of highs and lows for Hill, whose starting debut was dazzling as he broke Johnny Manziel's school record for passing yards (511) in a 52-28 blowout of South Carolina.

Hill led Texas A&M to a 5-0 start while throwing 17 touchdowns to only two interceptions in that stretch, earning early-season Heisman Trophy buzz and a nickname -- "Kenny Trill" -- after his eye-opening start.

But the last three games were a struggle for Hill, who has seen his average passing yards per game dip from 349 to 301.3. He threw six touchdowns and six interceptions in that span and was sacked 11 times after being sacked only four times in the first five games.

This is Hill's second suspension this calendar year. He was suspended during spring football after being arrested on a charge of public intoxication in March, when he was found passed out in College Station's Northgate bar district.

Allen, a true freshman, threw for 106 yards and a touchdown in his first career start Saturday. He also had two turnovers.

The No. 1-ranked pocket passer in the 2014 recruiting class and No. 35 overall player in the 2014 ESPN 300, Allen will also start at Auburnon Nov. 8. He had appeared in four games as Hill's backup, completing 23 of 38 passes for 264 yards and three touchdowns with two interceptions in that time.