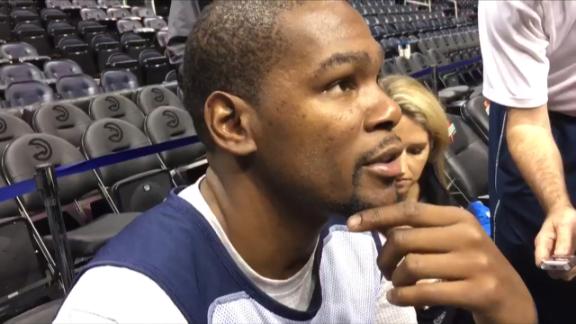 Oklahoma City Thunder forward Kevin Durant says he "idolized" Kobe Bryant as a player growing up, adding that he was angry at the media for their treatment of the Los Angeles Lakers star.

"I did idolize Kobe Bryant. I studied him, wanted to be like him," Durant said Monday at a shootaround in Atlanta. "He was our Michael Jordan.

"I've been disappointed this year because you guys [the media] treated him like s---. He's a legend, and all I hear is about how bad he's playing, how bad he's shooting and it's time for him to hang it up. You guys treated one of our legends like s---, and I didn't really like it. So hopefully now you can start being nice to him now that he decided to retire after this year."

Bryant, 37, announced Sunday that he is retiring at the end of the season. He is coming off injuries that have limited him to 54 games since the beginning of the 2013-14 season and has seen a steep decline in production.

Responding to social media backlash to his comments, particularly the part about media coverage, Durant said his point was noting the negativity around Bryant, rather than appreciating the accomplishments of a legend on his way out.

"I understand [the media] have to write about the game. Of course I understand that," Durant told ESPN.com. "Kobe hasn't played well, and his team hasn't played well, but did we expect that from them? You did say he was the 93rd-best player in the league, you did have the Lakers as the worst team in the West, but it seems like everybody is happy that he's going out like this. Every game he's played on TV is about how terrible he looks, every article the next day is about how he should retire and give it up. Just killing him.

"I never hear about the Finals MVPs, the accolades. They did it for [former New York Yankee] Derek Jeter, they will do it for Tim Duncan when he leaves even if he's playing bad. I know you gotta report the games, but you're going too in-depth about how bad he is. You're almost kicking him out the league."

"I think he's perceived as one of the most fierce competitors, a five-time champion, a two-time Finals MVP, 17 All-Star appearances," James said Tuesday. "I think the media has done a great job of building Kobe as who he is today. There's no reason for me to say that the media has made him look a certain way throughout his career. He's done unbelievable things and part of the reason why he's big as he is because obviously the work he's put into it, but also the coverage that we all get from you guys. So I don't see it that way. And I don't really get involved in that side of things, but I don't see it that way."

Durant, meanwhile, said he's learned to "respect those who came before me."

"This game saved my life, this game gave me a new life, this game taught me so much about life," Durant said Monday. "Hell yeah, I'm sensitive about everything involving it. I understand not playing well and stuff; that's a part of it. But you can't treat Kobe like he's D'Angelo Russell when it comes to his coverage. Be a little more respectful to what he's brought to the game. Take yourself out of it and think about the game! These media people take it too personal, and when he doesn't play well, it's their turn to kill him because they might not have liked what he said or did. But when you think about this beautiful game first, then all that personal s--- goes out the window when reporting. I think about the game, its players and everything else after that when I speak.

"They say I don't get the media and how they work," Durant said. "Well, they never got players and how we work."

Durant, 27, was teammates with Bryant on the gold medal-winning 2012 men's Olympic basketball team, defeating Spain in the finals to post a perfect 8-0 record. Durant competed against Bryant in two postseason series, with Bryant's Lakers winning in six games in 2010 and Durant's Thunder winning in five in 2012.

"He had an amazing career, a guy who changed the game for me as a player mentally, physically," Durant said. "Means so much to the game of basketball. Somebody I'm always going to look to for advice, for help, anything. Just a brilliant, brilliant, intelligent man. Sad to see him go. But he put his mark on the game while he was here." 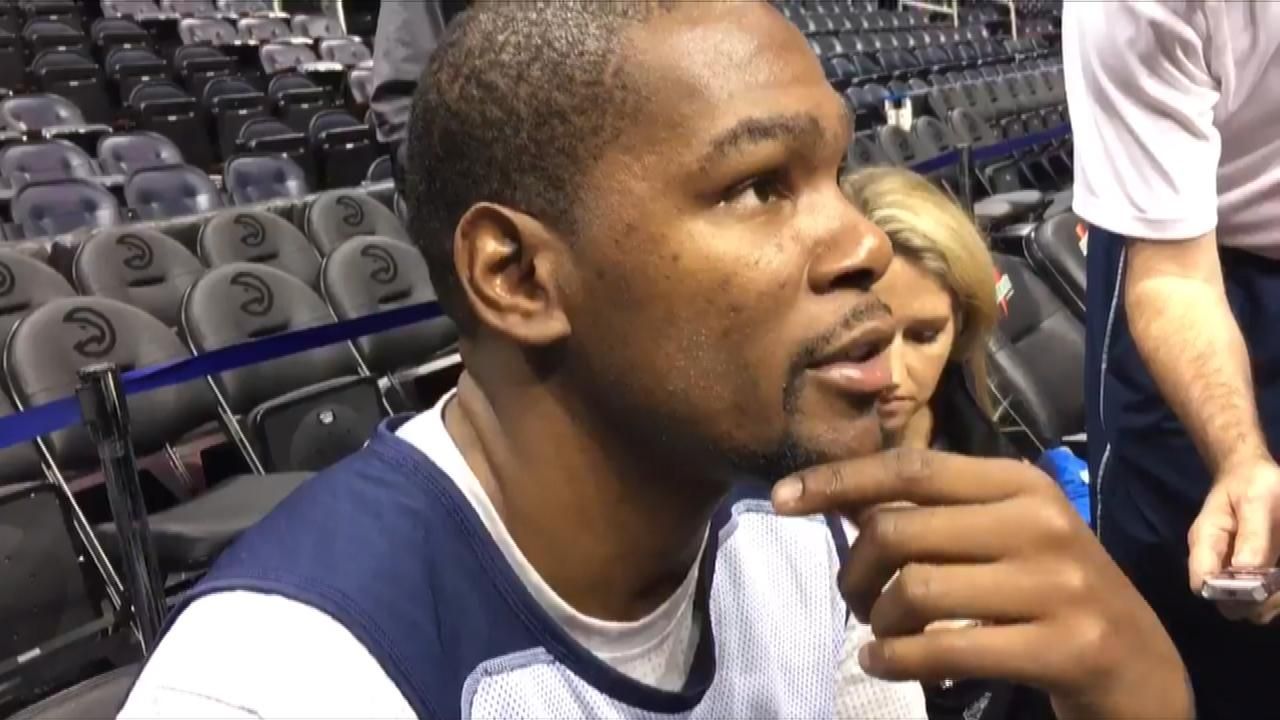 Durant puts media on blast for Kobe treatment
Thunder F Kevin Durant shares his thoughts on Kobe Bryant's final season and how he doesn't agree with the way the media has treated the Lakers legend as he approaches retirement. 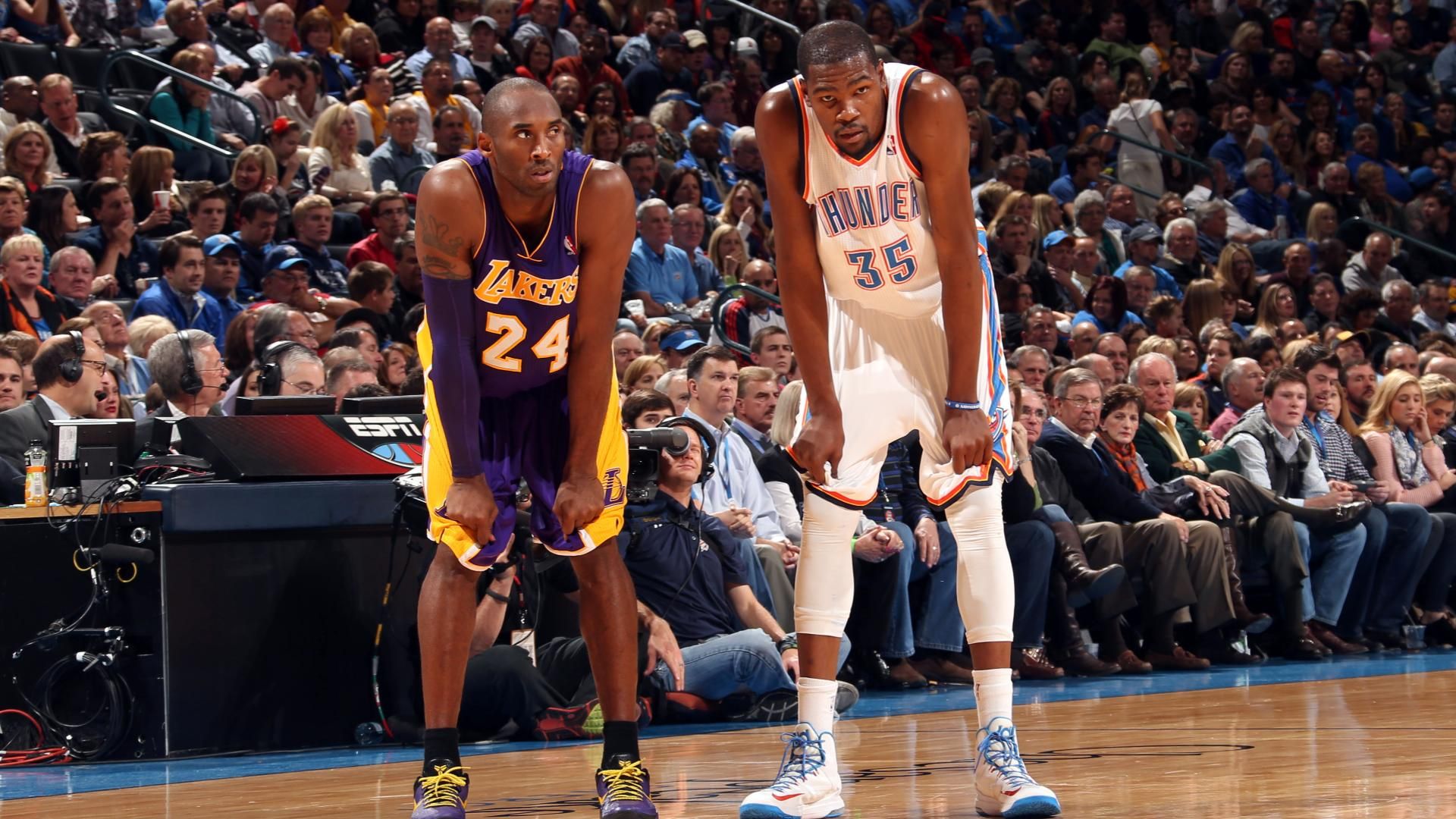