Kevin Durant to return for OKC 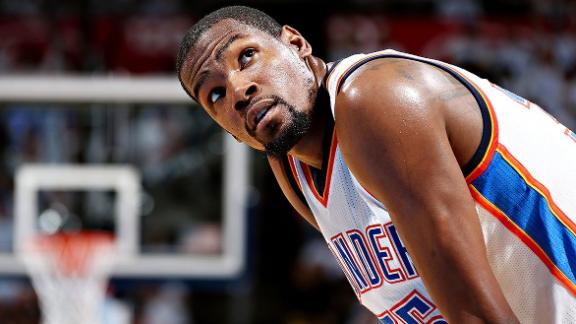 "Just excited to get back out there with my teammates," Durant said Tuesday. "It's been a long 6 weeks just trying to get better and get my foot right. The training staff did a great job, so I'm just looking forward to playing tonight.

Durant, 26, underwent surgery to repair a Jones fracture on Oct. 16 and had a timetable to be re-evaluated in six weeks. He returned to practice last week, going through mostly non-contact drills. He participated in a full practice Monday.

Thunder coach Scott Brooks said Durant will play around 30 minutes against the Pelicans.

"I have to be able to manage it," Brooks said. "You go in to every game thinking you have so many minutes and I have to structure the game plan around that."

Durant previously had missed only 14 games total in his seven-year NBA career. Last season, he averaged a league-best 32.0 points with 7.4 rebounds and 5.5 assists en route to his first MVP award.

The six-week absence for Durant is by far the longest stretch of time off during his career.

"It's just made me more anxious," Durant said of sitting out. "Pissed me off a little bit more."

Teammate Russell Westbrook returned from a fractured hand on Wednesday, and the Thunder (5-12) have won consecutive games.

Westbrook was sensational in his return, scoring 32 points on 12-of-17 shooting with seven rebounds and eight assists in just 23 minutes as the Thunder blew out the Knicks 105-78.

Oklahoma City is 14-1 in its past 15 games with both Westbrook and Durant on the floor.

"Nobody held their heads. Nobody said we're going to just wait until Russell and KD comes back," Durant said of his teammates. "We wanted to win all those games and that showed how much they care and how much they love to play the game.

"They didn't make any excuses. So tonight I've got to come out there and play as hard as they've been playing the last month or so."

The Thunder have held back a portion of their retooled playbook the first month as a lot of the new plays were designed to feature Durant and Westbrook. With the team whole again, the Thunder can get back to their preferred playing style -- fast, athletic and aggressive.

"Kevin and Russell make all the players so much better because they demand so much attention," Brooks said. "So the shots are going to be easier to set up. That's something we've struggled with offensively."

While Durant's presence has certainly been missed on the court, he's done his best to maintain one off it, constantly staying engaged in games cheering on teammates, arguing with officials and joining coaches in huddles.

"I know the coaches and my teammates are going to be happy I'm off the bench screaming in their ear all game," Durant said. "It should be fun."

Durant Excited To Be Back
Thunder forward Kevin Durant discusses making his season debut Tuesday against the Pelicans.