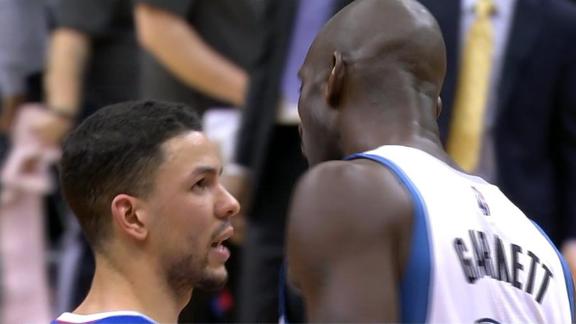 MINNEAPOLIS - Although Doc Rivers and Kevin Garnett showered each other with praise before Monday's game between the Clippers and Timberwolves, Austin Rivers wasn't as complimentary late in the fourth quarter, when both players received double technicals for jawing at each other.

With 3:23 left in the game and the Clippers leading the Minnesota Timberwolves 102-97, Rivers looked like he intentionally bumped Garnett as he walked back to the Clippers bench. Garnett then elbowed him and pointed at him, and Rivers got in Garnett's face before both were given a technical foul.

"I thought Austin should have punched him, personally," Doc Rivers said with a smile after the game.

Austin Rivers, however, wasn't smiling and sported a welt on his forehead that he said came as a result of a Garnett elbow earlier in the game.

"He elbowed me in my head, and that's not going to fly, really," Rivers said. "I have all the respect in the world for him. He's one of the best players to ever play the game, but at the end of the day, I'm a man just like he is, and that's all there is to it."

Rivers said Garnett was physical with him the entire game before they both received technicals in the fourth quarter.

"I let it go, and then we went and I didn't have the ball, and he just hit me in my stomach and knocked the wind [out of me], and Chris [Paul] threw me the ball, and I wasn't prepared for it because I had just lost my wind, and I threw it back to him," he said. "The play went on and just because I bumped him a little bit, he turned around and did all that stuff."

When asked if he bumped Garnett intentionally, Rivers said, "I was walking to my bench, and he was in my way, and I wasn't moving."

Garnett played for Doc Rivers in Boston for six seasons, but Austin Rivers said he doesn't have much of a relationship with Garnett. He grew up in Orlando and went to Duke before being drafted by New Orleans after one year of college.

"I don't really know him like that," Rivers said. "I was around a little bit growing up, and I still have respect for him. He's a competitor, man. That's what KG does. He knows I am too, so I'm not going to dislike him or say anything bad about him because he would do it to anybody, whether it was D.J., Matt, Chris, C.J. -- it doesn't matter. That's who he is. He's a competitor.

"To be honest, growing up I really wasn't around him that much. My little brother and my sister and my older brother were there all the time. I was kind of the one that spaced out and did my own thing but I think he respected that I was working on my game."

"I think there was a foul on the play, and I was just kind of walking to get to my spot on the free throw line, and Flip was out on the court," Redick said. "I'm not sure why he was out on the court, but he was yelling and stuff, so I said to the ref, 'Man, get him off the court.' And Flip turned to me and said, 'Man, shut the f--- up.' And he said it like three times, and I just walked to my spot, and I got a double technical for that. So I shouldn't have kept talking, but all I said to Josh [Tiven] was, 'I'm going to get my money back,' and he threw me out for that.

It was an odd sequence that was a mystery to many coaches and players, including Redick, after the game.

"To me, if an owner or a coach goes after a player for no reason, there should be some repercussions for that," Redick said. "I don't know why the player would receive a double technical. I didn't say anything to Flip. I said something to the ref: 'Get him off the court.' He shouldn't have been on the court in the first place.

"If somebody charges you up, it's hard to remain silent, and I thought I kept my composure in check. I would love to say something back to Flip, and I didn't cuss at the referee. I thought it was a little ridiculous. I don't know what else I could do other than shut up."