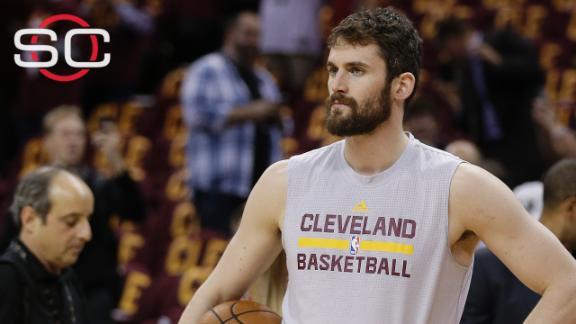 Kevin Love was cleared and played in the Cleveland Cavaliers' 108-97 loss in Game 4 of the NBA Finals on Friday night, but he did not start.

The power forward came off the bench to a rousing ovation at the 5:03 mark of the first quarter, entering for Tristan Thompson. He finished with 11 points, five rebounds and a block in 25 minutes.

The Cavs announced he had been cleared to play about an hour before tipoff. After the loss, they trail the Golden State Warriors 3-1 in the best-of-seven series.

A three-time All-Star, Love was able to participate fully in shootaround Friday, five days after suffering a concussion when he was struck in the back of the head by Warriors swingman Harrison Barnes in Game 2. Love was re-evaluated pregame when he arrived Friday at Quicken Loans Arena, joining the team for warm-ups on the court, before he was cleared.

Without Love in the lineup in Game 3, Cleveland got off to a strong start, going up 9-0 to begin the game and eventually leading by as many as 20 points in the first quarter. Richard Jefferson started in Love's place, and the Cavs moved James to power forward.

The Cavs stuck with that starting lineup for Game 4. There was talk that the Cavaliers were better off without Love after they beat the Warriors by 30 in Game 3, but when Love entered Game 4, the defense-challenged forward helped force a steal on the Warriors' next possession, contested a jumper from Barnes, and then scored on a putback to give the Cavs a 22-20 lead before the Warriors tied it again at 22.

One source close to the situation told ESPN's Marc Stein that Love was "really frustrated" by the hard-line stance the Cavs took to keep him off the floor Wednesday.

Love returned to the court Thursday, practicing post moves with assistant coach Vitaly Potapenko for approximately 20 minutes in front of the media. He looked spry as he completed a series of jump shots, drop steps and dunks around the basket. On Friday, he was taking jump shots when the media were allowed in for morning shootaround.

Cavs star LeBron James deferred to coach Tyronn Lue after shootaround Friday when asked whether Love should start Game 4 if he was cleared.

"I have an opinion on who's our general, and that's Coach Lue," James said. "He's going to make the right decision that he feels is best for the team. So I'm a whatever -- I think what's more important is his health, and we hope he's able to play tonight."

Love previously had started all 152 regular-season games and 20 postseason games he had played in since joining the Cavs in the summer of 2014.