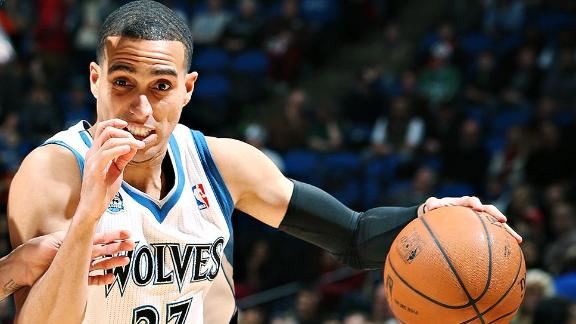 MINNEAPOLIS -- Minnesota Timberwolves shooting guard Kevin Martin will be out indefinitely after fracturing his right wrist in a victory over the New York Knicks, the team announced Friday.

Hours before they were set to tip off against the San Antonio Spurson Friday, the Timberwolves announcedthat Martin broke the wrist on his shooting hand in a fall during the first quarter of Wednesday's game.

He managed to remain in the game and score 37 points against the Knicks as the Wolves snapped a five-game losing streak.

Martin injured his right wrist with 6:48 to play in the first quarter when he was fouled while shooting a 3-pointer. From that point on, Martin went on to score 34 points and make 6-of-9 3s.

Martin was actually a game-time decision that night after needing IV fluids while battling an illness for most of the day. He made no mention of the injury in his postgame remarks to the media.

"I realize the situation and after the guys worked so hard after the horrible road trip we had," Martin said after the game. "Coach challenged us in practice. There was never a thought to not playing. You have to get out there with your teammates and show them that you're dedicated to being here."

It's yet another crushing blow for a seemingly snake-bitten franchise that has not made the playoffs in 10 years and is rebuilding after trading All-Star Kevin Love this summer.

The Wolves are already playing without starting point guard Ricky Rubio, who is out indefinitely with a sprained left ankle, starting center Nikola Pekovic, who will miss at least the next two games with a sprained right wrist, and starting power forward Thaddeus Young, who is mourning the sudden passing of his mother.

On a team starving for offense, Martin was the best thing the Wolves had going. He scored 34 in a defeat in Dallas that ended a six-game road trip and then got the Wolves off to a great start against the Knicks with 13 points in the first quarter.

Martin is averaging 20.4 points and shooting 48.1 percent on 3-pointers this season.

The Wolves have not yet determined if Martin will need surgery to address the injury. Veteran Corey Brewer and youngster Shabazz Muhammad figure to get the bulk of the minutes in Martin's place.