Kevin Ollie telling those close to him he's staying at UConn 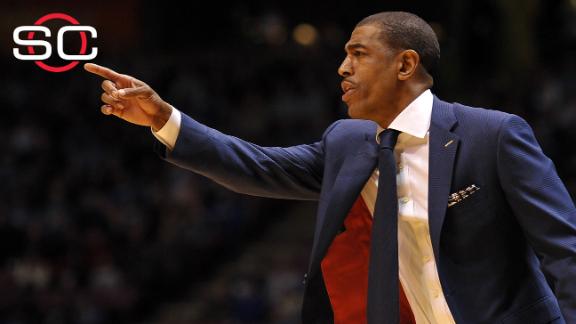 UConnmen's basketball coach Kevin Ollie has told those close to him on campus that he is staying at the school despite the current vacancy with the Oklahoma City Thunder, sources told ESPN's Andy Katz on Thursday.

Earlier Thursday, CBSSports.com reported that Ollie had removed himself from consideration for the Thunder's head coaching job.

Before Brooks was fired, Ollie hadreleased a statementearlier Wednesday saying he had "no plans to pursue other opportunities."

While Donovan is now considered a favorite for the job at this early stage of the search, NBA coaching sources told Stein that San Antonio Spurs assistant coach Ettore Messina is a candidate on Thunder general manager SamPresti's radar.

Spurs coach Gregg Popovich brought Messina in as an assistant coach during the offseason and deputized the Italian to serve as interim coach in November when Popovich missed two games to undergo what was termed a "minor medical procedure."

Messina also served as an assistant with the Los Angeles Lakers under then-coach Mike Brown and has long been regarded as the first European-born coach likely to become an NBA head coach. Blatt was born and raised in the Boston area before hatching his coaching career in Israel.

The 42-year-old Ollie, who spent 13 years as an NBA journeyman before returning to his alma mater, has been linked to several NBA job openings since leading the Huskies to the 2014 NCAA championship.

Ollie played his final NBA season (2009-10) with the Thunder and is held in high regard by Kevin Durant.

"Kevin Ollie changed the culture with the Thunder, just like he's doing now with UConn. He was a big part of what we do, and he still is, because of what he instilled in us. He's always going to be a brother of mine," Durant told The Hartford Courant in 2013.

Ollie signed a $15 million, five-year contract with UConn in May 2014.