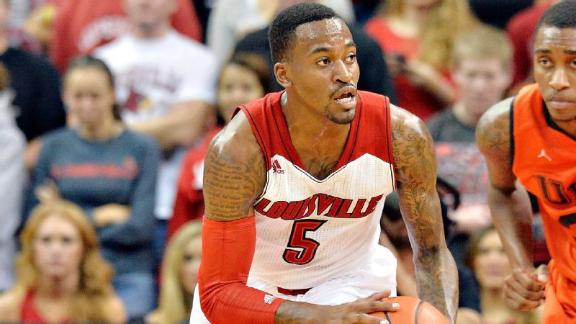 Former Louisville guard Kevin Ware has received a waiver from the NCAA to play this season at Georgia State.

Georgia State coach Ron Hunter told ESPN.com that Ware, who suffered a gruesome broken leg against Duke in the 2013 NCAA tournament, was cleared Wednesday morning by the NCAA.

"I think it's definitely the right thing to do," Hunter said. "Emotionally for the kid. Physically, he's fine. But this will be a huge weight lifted off his shoulders."

The 6-foot-2 Ware averaged 1.7 points in nine games last season before deciding to shut it down in mid-December and apply for a medical redshirt.

After the season, Ware opted to transfer and chose Georgia State, which is close to his parents' home in Atlanta. He will have two years of eligibility at Georgia State.

Hunter said Ware has been working out every day and will play on the team's trip to Central America on Aug. 7 in which the Panthers will play four games.

"It's one of the main reasons we did this trip," Hunter said. "So he can play."

Ware will team with R.J. Hunter and Kentucky transfer Ryan Harrow to form what could be the best mid-major perimeter trio in the country. Georgia State returns three starters from a 25-win team that went to the NIT.

Hunter averaged 18.3 points per game last season while Harrow, who was maligned in stints at NC State and Kentucky, averaged 17.8 points and 4.2 assists.

"We're following almost the identical plan and blueprint we did with Ryan," Hunter said. "Kevin's biggest issue right now is that he's just trying to fit in and he's worried about not stepping on anyone's toes. We want him to be more aggressive and get back to the old Kevin Ware."