Kirk Cousins on chasing down late INT: 'It's because I want to win' 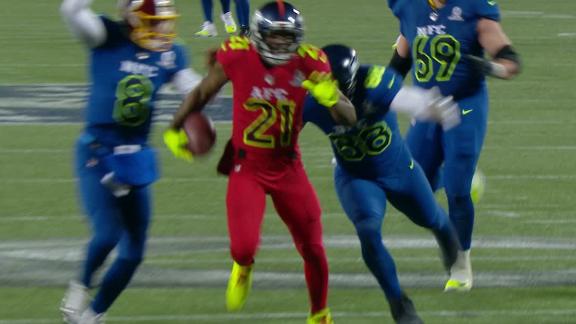 ORLANDO, Fla. -- Quarterback Kirk Cousins did something the Washington Redskinsmost certainly didn't like in the final minutes of Sunday's Pro Bowl.

Cousins' fiery competitiveness came out late, when he hustled down the field after throwing an interception to Buffalo Bills linebacker Lorenzo Alexander, who lateraled the ball to Denver Broncos cornerbackAqib Talib. Cousins chased down Talib and swiped down with his right, throwing arm to cause a fumble and prevent a touchdown.

Both players landed hard but were not injured.

"It's because I want to win, man," Cousins told ESPN after the game of why he went for the fumble.

Cousins, a pending free agent, is set to get a big contract extension or a franchise tag worth approximately $24 million.

"I thought I had a chance to strip it, and maybe we'd recovered it," Cousins said. "I don't know. Something could've happened. You never know. You got to play it all the way through."

The AFC won the game 20-13 in one of the most competitive Pro Bowls in recent memory. Cousins' hustle was a good example of that, though the play surely made Washington and Cousins' representative hold their collective breath.

Cousins said that in the moment he wasn't thinking about preserving his health or his upcoming contract.

Talib said he was caught by surprise that the quarterback was hustling to catch him from behind in the Pro Bowl.

"I didn't know," Talib said, laughing. "I saw a lineman, and when I looked this way, I saw another lineman. I thought I was going to walk in, and [Cousins] came and got me.

"I saw all the blue end zone, and I thought I was going to walk in."

AFC tops off Pro Bowl win with wild pick and lateral
With the NFC looking for a game-tying touchdown, Lorenzo Alexander catches an interception and laterals to Aqib Talib, who runs for the end zone but is stripped by Kirk Cousins. The AFC makes the recovery.