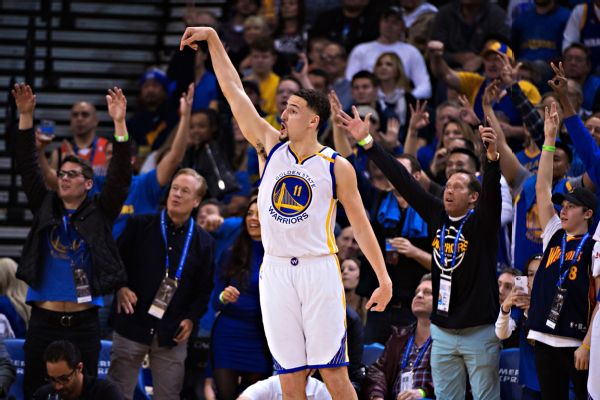 Indiana as a team converted only 26 field goals at the end of three quarters at Oracle Arena.

"I felt like every shot I took was a good shot," Thompson said. "It's the way I was playing off of my teammates, too. It's easy to get open looks when you're running off Zaza [Pachulia] and Draymond [Green] all night, and I think it started for me when I got a few layups in the beginning. That always opens up my game, and whenever I'm active off the ball, that's when I'm at my best."

Thompson is the first player in the shot-clock era to score 60 points with fewer than 30 minutes played.

"That's a feat that I'd put money on to probably never be touched ever again in the history of basketball," teammate Stephen Curry said. "It's unbelievable."

Thompson's 60 points were the most through three quarters since Kobe Bryant scored 62 in a December 2005 game.

Thompson's previous career high was 52 points last season against the Kings, a contest in which he produced an NBA-record 37 third-quarter points while sitting out the fourth due to a rout.

After Monday's game, he was asked if he begged coach Steve Kerr to put him back in during fourth-quarter play.

"I didn't, but it's just unfortunate the two times I got my career high, I didn't even play in the fourth quarter," Thompson said in jest. "We should keep these games closer next time. But it's all good."

The sharpshooter scored 40 of his points in the first half, the first player with a 40-point first half since Bryant had 42 points against the Washington Wizards on March 28, 2003.

Thompson, 26, also was the first player to score 40 points in any half since Chicago Bulls forward Jimmy Butler registered 40 in the second half on Jan. 3, 2016, at Toronto.

And to put his night into perspective, Thompson registered the first 60-point game for the franchise since Rick Barry scored 64 points on March 26, 1974, versus the Portland Trail Blazers.

Thompson moving without the ball all evening made life miserable for the Pacers.

"I don't even know what to say," Kevin Durant said. "It was crazy because he probably has the ball in his hand for probably not even two minutes in the whole game. He was catching, shooting, cutting."

Thompson said that had he been allowed to sub in one more time, 80 points wasn't out of reach.

"Maybe. I think I could have," Thompson said. "Maybe one day I'll have the opportunity, but 60 in 29 minutes is not too bad. I'm satisfied with that."

Fans chanted "Klay, Klay, Klay" during moments when there were breaks in the action. When he departed the game, fans gave him a standing ovation.

"That was a pretty amazing performance," Kerr said. "We know he's capable of that. Everybody around here remembers his 37-point quarter, so it always feels like it's a possibility [he can go off]."

Klay's 60 points in 60 seconds
Klay Thompson becomes the first player in the shot-clock era to score 60 points in under 30 minutes of action for the Warriors against the Pacers. Check out all 60 of his points in only 60 seconds.