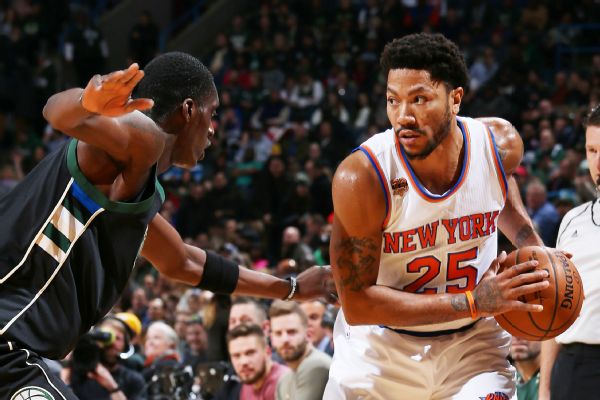 But one game after Rose didn't show up for a tilt and the team had no idea where its starting point guard was, the drama continued for the reelingNew York Knicks, who suffered what could have been their most painful loss of the season to the Philadelphia 76ers.

New York lost at the buzzer for the second time in five games but this time blew a 13-point, fourth-quarter lead. The Knicks led by 10 with 2:29 remaining.

Unlike in Monday's 110-96 loss to theNew Orleans Pelicans, the Knicks had Rose in their starting lineup. After explaining that he left the team for a "family issue" to be with his mother in Chicago, Rose declared himself mentally ready to return.

Rose, who was fined a "hefty" amount, according to Knicks head coach Jeff Hornacek, displayed moments of vintage Rose on Wednesday. The point guard hit 11 of 16 shots and scored 25 points.

He nailed step-back midrange jumpers, attacked the basket and had a big fourth. He hit his final four shots, scoring eight points in the final quarter, including a 14-foot step-back jumper and a difficult reverse layup on Joel Embiid (21 points and 14 rebounds).

"Just be Derrick," Rose said of his mentality upon returning. "That was about it."

After the Sixers (11-25) pulled within one with 27.8 seconds left, Hornacek went back to Rose. Carmelo Anthony, who scored 28 points but was held scoreless in the fourth, came over to screen for Rose on the left wing.

Rose drove baseline before the defense collapsed, passing out to Brandon Jennings at the top of the key. Jennings swung the ball over to an open Kristaps Porzingis on the right baseline, but Porzingis badly missed a 3-point attempt.

The ball was tipped out toward the Sixers' basket, and Philadelphia grabbed the loose ball and capitalized, scrambling downcourt, before McConnell made his shot near the baseline to set off a joyous celebration in Wells Fargo Center.

The Knicks walked off the floor stunned.

"We got to change our mentality," an exasperated Lee said. "It should be defense first. ... Countless amount of times it came down to transition, and they got wide-open shots, they got dunks, they got layups, they did whatever they wanted to do tonight."

Anthony had warned the morning of the game at the shootaround that the Knicks' season could really take a turn for the worst if they don't start making adjustments right away. He didn't think the Knicks had reached a dire situation yet and wanted to see his team reset with Rose back.

"I think now is just a time that everybody can just exhale a little bit and kind of relax," Anthony said after the shootaround. "It was a little tense around here the last couple of days. You can't play basketball like that. We all need to just relax and focus and put everything else behind us."

The Knicks return home on Thursday with a chance to stop the bleeding against Rose's old team, the Chicago Bulls.

"We should tell ourselves that it's unacceptable," Anthony said of the stinging loss to Philadelphia. "We were winning this game coming down the stretch. We were winning with 20-something seconds left. We came up short. So it should be unacceptable to all of us."