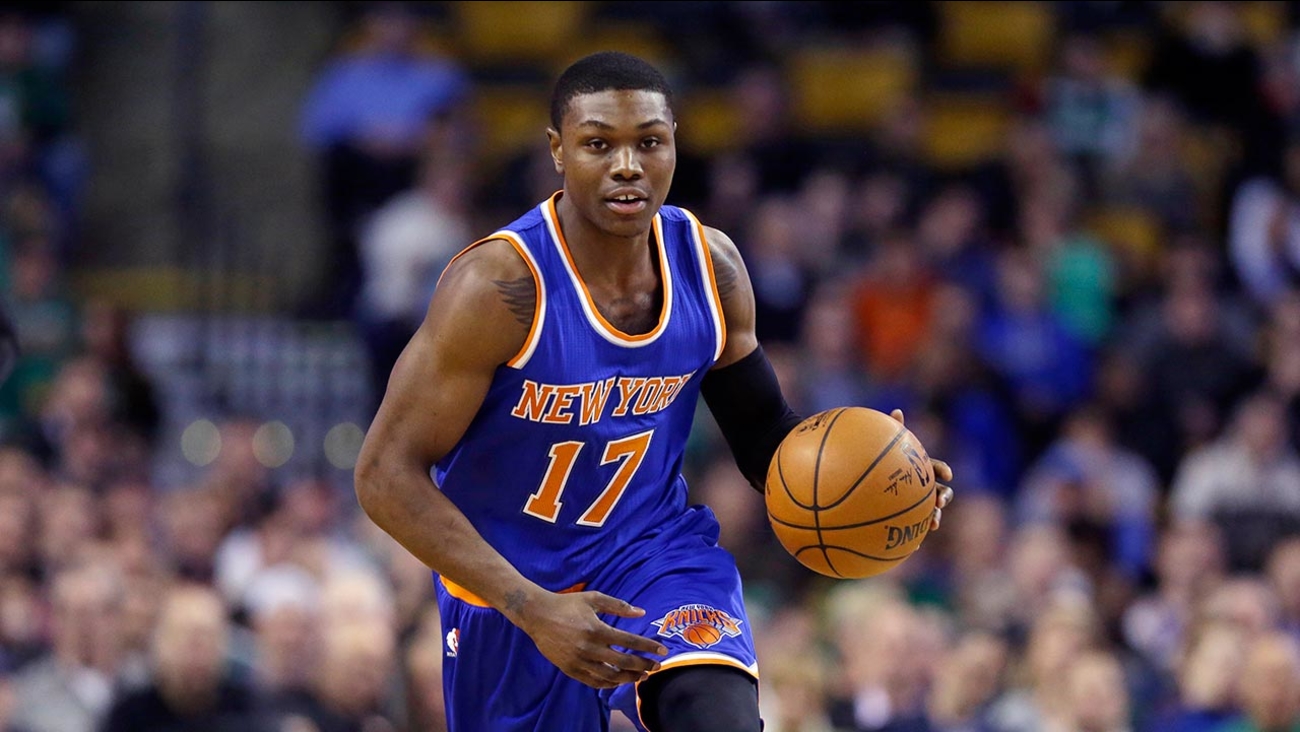 New York Knicks forward Cleanthony Early (17) dribbles up court during the first half of an NBA basketball game against the Boston Celtics in Boston, Wednesday, Feb. 25, 2015. (Elise Amendola)

Early left CityScapes in Queens with his girlfriend at about 4:30 a.m. in an Uber cab when his vehicle was surrounded by at least two other cars and as many as six men got out, the two officials said. Early handed over two gold chains before he was shot in the right kneecap, the officials said. The men drove off. The Uber driver and girlfriend were uninjured, and the driver was robbed only of his identification. Early, 24, was hospitalized in stable condition.

The two law enforcement officials spoke to The Associated Press on condition of anonymity because they were not authorized to release the victim's name.

The team said in a brief statement that it was aware of an incident involving Early and "relieved that he is not in a life-threatening situation."

Police were searching for suspects and trying to determine if it was a carefully planned attack or a spur-of-the-moment hit.

The theft comes about 10 days after Knicks forward Derrick Williams was robbed of $617,000 in jewelry from his home. He had taken home two women from a Manhattan club. Police are still looking for suspects.

Williams has declined to comment on the theft, but the case raised questions about whether NBA players should have a curfew like other professional sports. In April, Indiana Pacers forward Chris Copeland, his girlfriend and another woman were stabbed following a late-night argument on the street near a Manhattan nightclub.

Knicks coach Derek Fisher was asked about the policy at a news conference after Williams was robbed.

"I don't really have to get into our policies of what you can and can't do," he told reporters last week. "We don't have a curfew like in the NFL or other sports do on certain nights. It's an unfortunate incident."

The 6-foot-8 Early was selected by New York in the second round of the 2014 NBA Draft following his senior season at Wichita State. The Bronx native has seen action in 10 of the Knicks' 33 games this season and is averaging 0.7 points per game. He played for less than a minute during the Knicks' 108-96 win over Detroit on Tuesday night at Madison Square Garden.

Early missed two months of the 2014-15 season after undergoing arthroscopic surgery on his right knee, the same one injured in Wednesday's shooting.

In a 2014 story in the Daily News of New York on Early during his amateur days that brought him to a prep school, community college and Wichita, where he won 30 or more games each year, he said he was "born on the bottom."

"I wasn't bad, just mischievous, lacked guidance. I had to overcome those adversities, understand the world is a certain type of way," he said. "I'm not gonna cry about it or dwell. I have an opportunity to improve by rational decisions."