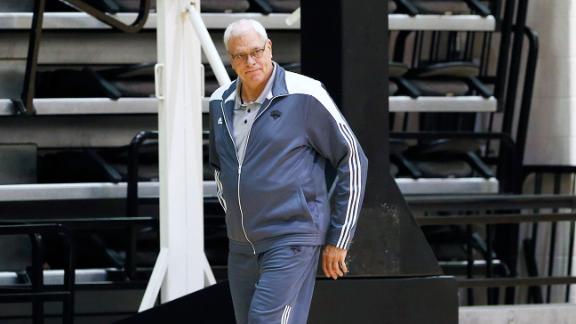 If nothing else, the New York Knicks will be a little more Zen under Phil Jackson.

Jackson revealed Sunday that he has hired someone to put the team through "mindfulness training" this season.

"This is one of the things that they have to go through if they're going to be part of the Knick organization," Jackson said at the New Yorker Festival in Manhattan.

Jackson's affinity for Eastern philosophy is well-known. He earned the moniker "Zen Master" by instilling the principles of mindfulness, visualization and other techniques associated with Eastern religions in his teams in Chicago and Los Angeles.

He has already begun this process with the Knicks. An instructor has been teaching the team about mindfulness, a form of meditation that stresses the importance of staying in the moment.

"There's a mindfulness training program that's very logical and very calm, quiet, and we've started the process with this team, and [first-year head coach] Derek [Fisher is] all for it. He's a proponent of it," Jackson said Sunday. "And yet I think that it's kind of what I am inserting in here as part of what I think has to happen because I know what effect it [has]. I think it's very difficult sometimes for a coach to do this because it's so anti what we are as athletes.

"We're about action; we're about this intense activity that we've got to get after. And this mindfulness is about sitting still and being quiet and controlling your breath and allowing you to be in the moment, and yet it's so vital for a team to have this skill or players to have this skill. To be able to divorce themselves from what just happened that's inherent to them -- a referee's bad call, or an issue that goes on individually or against your opponent. You've got to be able to come back to your center and center yourself again."

Fisher said he underwent mindfulness training while playing under Jackson with the Lakers.

"I think it falls into the category of mental performance. We've seen that evolve in professional sports in recent years where instead of always focusing on improving your performance in just the muscles and the bodies and the shooting, there is a very big muscle up here that also needs training sometimes," Fisher said. "And so mindful training, mental performance, we take it seriously."

Amar'e Stoudemire said on Monday that the Knicks met with an instructor during training camp. It is unclear how often the team will undergo training. But Stoudemire intimated that it would continue during the season. And the veteran forward/center thinks the Knicks can benefit from it.

"Everyone has thoughts that creep into their mind. But you want to make sure you eliminate those as quickly as you can," Stoudemire said. "It will definitely help for sure. It just keeps you focused on the task at hand, it keeps you in tune. There's so many ups and downs throughout the game of basketball. Having awareness of your mind will definitely help."

Jackson hopes that this will help the Knicks on the court. The team finished last season with just 37 wins and missed the playoffs for the first time in four seasons. Jackson became team president in March, agreeing to a five-year, $60 million contract.

He overhauled the roster in his first offseason as president, replacing coach Mike Woodson with Fisher and trading starters Raymond Felton and Tyson Chandler to Dallas for a package that included point guard Jose Calderon and center Sam Dalembert.

He also re-signed Carmelo Anthony to a five-year, $124 million contract.

It will be interesting to see how Anthony and his teammates take to mindfulness training.

"You have to be in the moment. Being in the moment requires a certain sense of presence," Jackson said. "It will help them be focused in their job."

As a coach, Jackson famously handed out various books that he saw as being tailored to his players in Chicago and Los Angeles, but he said he isn't sure if he will do that with the Knicks.

"I'll probably ask Derek if he wants to do that," Jackson said.