Kobe Bryant on first game in nearly 9 months: It was 'good to get out there' 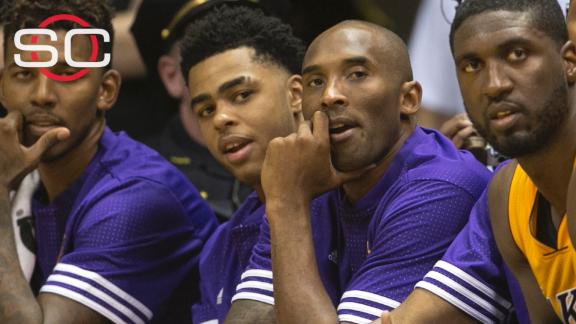 With about 10 minutes left in the first quarter of the Los Angeles Lakers' preseason opener Sunday against the Utah Jazz, the 37-year-old guard fired a contested 3-pointer from the left corner, and it hit the side of the backboard.

The rest of Bryant's brief outing wasn't much better, with the longtime Laker finishing with five points on 1-of-5 shooting in 12 minutes, all of them coming in the first quarter before a Lakers-heavy crowd at the Stan Sheriff Center at the University of Hawaii at Manoa.

After his first game since late January, when he tore the rotator cuff in his right shoulder, ending his 2014-15 season after 35 games, Bryant said he felt "pretty good" and that it was "good to get out there."

He added that his legs feel strong and that he didn't feel any fatigue.

"It's just getting the timing," said Bryant, whose past three seasons have all been cut short by injury. "Getting timing. Getting acclimated to that again."

"He was pretty good," Scott said. "He moved well."

Scott said the plan of playing Bryant 12 minutes was agreed upon before the game.

"I told him before we went out, 'Let's just play the quarter and then let's shut it down and see how you feel [Monday]. We'll go through practice and then get ready for Tuesday,'" Scott said.

The Lakers face the Jazz again Tuesday, and Bryant is expected to play limited minutes in that game as well, though Scott said they'll likely increase Bryant's minutes gradually throughout the preseason.

What's the target for how many minutes Bryant would ultimately play? Scott declined to say.

Bryant started at the small forward position, as Lakers rookie and 2015 No. 2 overall draft pick D'Angelo Russell and 2014 second-round pick Jordan Clarkson started at the other two guard positions. Scott also started power forward and 2014 No. 7 overall pick Julius Randle and center Roy Hibbert, whom the Lakers acquired from the Indiana Pacers this offseason.

Bryant is entering his 20th season with the Lakers, an NBA record for the most seasons a player has spent with one team. It's also the final season of his deal with the team, during which he'll be paid a league-high $25 million.