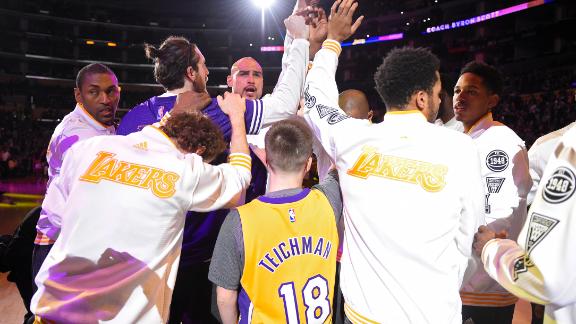 LOS ANGELES -- As their home crowd rained down the loudest boos of the season, the Los Angeles Lakers lost their 10th straight game Sunday, falling 101-82 to the Charlotte Hornets at Staples Center.

The 9-41 Lakers have now tied for their longest losing streak in franchise history -- the 1993-94 Lakers also lost 10 straight games -- and this team could break that tie with consecutive loss No. 11 on Tuesday against the Minnesota Timberwolves at Staples Center.

"Honestly, it doesn't really matter," Lakers icon Kobe Bryant said of the notion that his team must win Tuesday to avoid that dubious mark. "What, it makes a s---y season less s---y?"

Lakers coach Byron Scott said he was aware of the loud boos, which rained down heavily in the second half as the Hornets led by as much as 27 points.

"I think the fans are just as frustrated as we are," Scott said. "Hopefully the boos weren't because of a lack of effort because I thought our guys played [hard]. We just missed shots."

Lakers reserve forward Ryan Kelly was, for whatever reason, a particular target of some rather aggressive boos from Lakers fans when he missed a pair of free throws and then four consecutive shots -- three of them from beyond the arc - late in the third quarter.

Then, after Kelly missed another jumper early in the fourth quarter, he was taken out of the game for forward Julius Randle. Kelly walked off the court to some of the loudest cheers the Lakers have heard all season.

"What is that, 10 straight [losses] now?" Kelly asked. "I went through a stretch there where they were making a run and I was missing shots and I just got a few in a row. It happens sometimes."

Kelly, a former Duke standout who finished with 6 points on 3-of-9 shooting in 17 minutes off the bench, said he could never recall being booed in such a way.

Confidence is an issue at the moment, Scott said.

"We've got a lot of guys in [the locker room] right now with a lack of confidence, and we have to somehow get that back," Scott said.

He later added, "With our guys now, once they see that it's starting to go south a little bit, they lose all hope and confidence and somehow we've got to rally together and try to get that back."

Bryant, who is retiring this summer after 20 NBA seasons, all of them with the Lakers, said he's trying to help the team's younger players not give in to losing.

"I talked to them a little bit about the chippiness, the meanness," Bryant said. "I can only lead them so far, and I'm not going to be here next year. For me to just pull them out of them is just a waste and not growing. In other words, it's just me talking to them. I'm trying to get them to pull it out of themselves."

Bryant is also trying to support Scott, who was Bryant's teammate during Bryant's rookie season.

"I've been his friend, his younger brother and his psychiatrist at times," Bryant said. "It's tough. Byron is as competitive as you can get, man. It's tough."