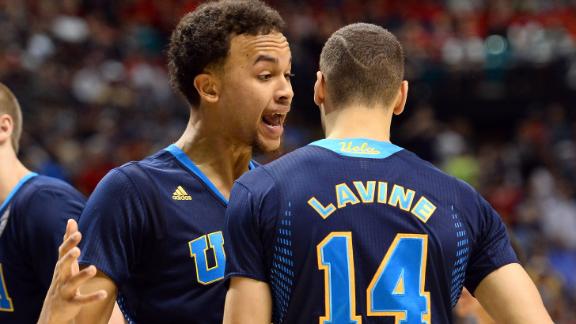 UCLA will lose Kyle Anderson and Zach LaVine early to the NBA draft.

Anderson's father told ESPN before the start of the season that his son would leave school after his sophomore year. He told ESPN after the Bruins' loss Thursday night to Florida in the Sweet 16 that Anderson will meet with the staff but that the plan hasn't changed.

LaVine's father, Paul, told the Los Angeles Daily News his son will forgo his remaining eligibility as well. (Coach Steve Alford told ESPN.com he has yet to be informed of a decision from LaVine or his family.)

Both players are considered potential first-round picks by NBA executives.

Anderson is a 6-foot-9 point guard who was extremely productive this season, averaging 14.6 points, 8.8 rebounds and 6.5 assists in 36 games. Scouts have varying opinions on Anderson because of his unusual size for his position, but he's considered a late first-rounder by most who were contacted by ESPN.

LaVine is more about potential. He showed flashes while coming off the bench this season as a freshman, yet he was inconsistent. NBA executives are enamored with his upside, but LaVine scored a total of nine points in his final five games and was 0-for-10 from long range. He averaged 9.4 points per game as a freshman.