Lakers, Pacers near trade that will send Roy Hibbert to L.A. 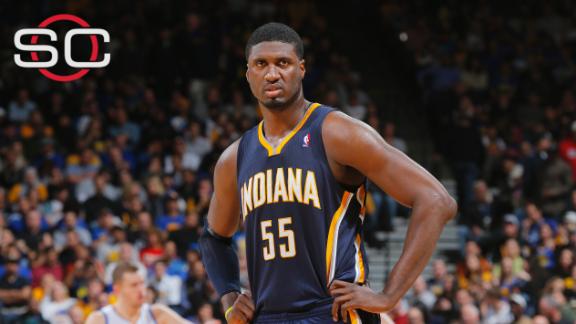 The Los Angeles Lakers are nearing agreement on a trade with the Indiana Pacers that will bring them former All-Star center Roy Hibbert by week's end, according to league sources.

Sources told ESPN.com that the teams are still discussing the final framework of the deal but have committed to a swap that will see Hibbert absorbed into the Lakers' salary-cap space after they missed out on all of their primary free-agent targets.

Thursday is the first day that the deal can be consummated, after a leaguewide moratorium on roster business is lifted, and one source told ESPN.com on Saturday: "It'll get done after July 9."

The Lakers will absorb Hibbert's $15.5 million salary for next season into their salary-cap space, sources said.

The Lakers were snubbed in free agency by high-profile targets such as LaMarcus Aldridge and DeAndre Jordanas well as second-tier big men such as Greg Monroe and Robin Lopez.

The obvious next step for the Lakers is to trade for a big man in the final year of his contract who won't affect L.A.'s free-agency plans for the summer of 2016, making Hibbert and former Golden State Warriors All-Star forward David Lee two natural targets.

But sources said Saturday that the Lakers are not actively pursuing Lee.

The Lakers' draft night decision to select guard D'Angelo Russell with the No. 2 overall pick, as opposed to a big man such as Jahlil Okafor or Kristaps Porzingis, has made finding a big man their priority in the short term.

Pacers president Larry Bird has made it fairly obvious since the end of Indiana's season that Hibbert is no longer in the club's plans. The Pacers were hoping that Hibbert would opt for free agency this summer, but he elected to exercise his player option for the coming season valued at $15.5 million.

As ESPN.com reported on draft night, when Hibbert's decision to opt in became known, Indiana pledged then to try to trade its interior defensive anchor as it pursues a faster playing style. To speed its team up, Indiana struck a deal earlier this week with free-agent guard Monta Ellis, reaching terms on a four-year, $44 million deal to sign him away from the Dallas Mavericks.