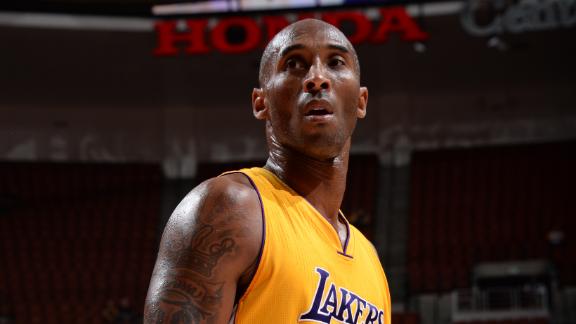 Lakerspresident Jeanie Buss has a message for any player who doesn't want to play with Kobe Bryant: good riddance.

"Any free agent that would be afraid to play with Kobe Bryant is probably a loser, and I'm glad they wouldn't come to the team," Buss said during a "SportsCenter" interview Thursday.

Buss was asked to comment on an ESPN The Magazine feature published earlier in the week, in which several agents and NBA personnel -- including Lakers insiders -- said that L.A. has been unable to attract top talent in free agency because players don't want to work with Bryant.

"I read the story," Buss said Thursday. "I don't agree with any of it.If there is somebody that's on our payroll who is saying things like that, I'll soon get to the bottom of it, and they won't be working for us anymore."

In fact, Buss has a warning for all of Bryant's detractors: "I have no doubt that Kobe will make people regret ever saying" those comments, she said.

The Lakers have won five championships with Bryant, though they haven't made a trip to The Finals since 2010 and missed the playoffs entirely last season as Bryant appeared in just six games because of injuries.

Bryant, now 36, signed a two-year extension with the Lakers last year worth $48.5 million. He is the league's highest-paid player.

In recent offseasons, the Lakers have courted and failed to sign free-agent stars including Dwight Howard, Chris Bosh and Carmelo Anthony. The Lakers were particularly interested in Anthony, offering him a maximum four-year, $95 million deal to come to L.A. last summer. Bryant, however, did not make the Lakers' meeting with Anthony as planned (the meeting time was changed and a traveling Bryant was unable to attend). Anthony ended up re-signing with the New York Knicks for 5 years, $122 million -- or some $27 million more than he could have made with the Lakers.

"We made a very good case for [Carmelo] coming to Los Angeles," Buss said. "But he's from New York, he sees a mission. I understand why he chose to stay with New York. I don't think any of that has to do with Kobe Bryant."

Former Lakers coach Phil Jackson, incidentally, was named team president of the Knicks in March. Jackson was rumored to be close to returning to coach the Lakers in 2012, but the team opted to hire Mike D'Antoni instead. Jackson, according to a source, was "stunned" by the decision at the time.

Buss, who is engaged to Jackson, said Thursday of the decision: "I understand my brother [Lakers vice president] Jimmy [Buss] and [general manager] Mitch Kupchak have a vision for the team that they want it to be. I respect that. That is their job. I've empowered them to do that job. So if Phil didn't fit into their plans, I understand that. But I'm biased. I wanted Phil to come back and coach Kobe and Dwight Howard."