Laremy Tunsil: 'Here to talk about the Miami Dolphins' 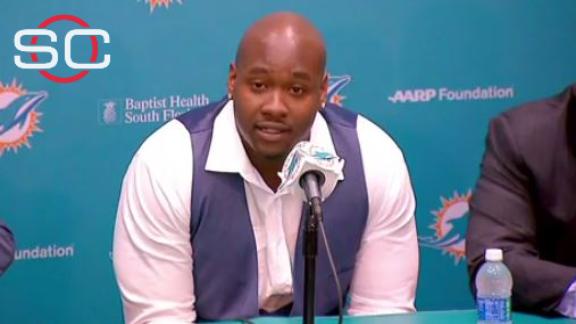 DAVIE, Fla. -- A little over an hour after he was a no-show at his introductory news conference with the Miami Dolphins, first-round pick Laremy Tunsil spoke to reporters after all.

When asked if it was something he ate, Tunsil said, "Probably."

Tunsil refused to elaborate on transgressions made at Ole Miss, saying multiple times that he was "here to talk about the Miami Dolphins."

"Just know that they got a good guy that puts everything on the line for the team," Tunsil said of joining the Dolphins. "It's been good. I've been drafted. I'm happy."

He also emphasized that he has "no character issues at all."

Earlier in the afternoon,Miami's brass was left to speak on behalf of Tunsil, whose family also didn't attend the news conference.

"We're trying to find that out right now," Gase said when asked to describe what happened to Tunsil. "He's with our medical people right now."

Tannenbaum emphasized that the team was comfortable with the pick, and that it was unanimous within the organization.

On Thursday night, a social media video was posted just before the draft of Tunsil wearing a gas mask and smoking a bong. The offensive lineman also admitted Thursday that he took cash from an Ole Miss coach, which sent shock waves throughout that program.

"We went to work immediately on Thursday night and we have made a lot of progress," Ole Miss athletic director Ross Bjork said Saturday. "The facts are way more important than speed and a public display of the process. We are working with all parties to find an answer and a resolution."

Tunsil was suspended seven games last year for taking improper benefits while in college. Tunsil improperly used three loaner cars without paying, according to the NCAA.

The NCAA launched an investigation into improper benefits after Tunsil and his stepfather, Lindsey Miller, filed domestic charges against each other last year. Tunsil said he attacked Miller because his stepfather assaulted his mother, Desiree Polingo. Miller said Tunsil's attack was unprovoked and that he was trying to stop his stepson's contact with agents. The criminal charges against both men were dropped in August.

Miller's attorney Matthew Wilson told ESPN on Friday that his client was not responsible for leaking the video of Tunsil smoking from the bong on Twitter. The video was posted shortly before the draft started Thursday night. Tunsil said his Twitter account was hacked, and he has deleted his account.

There appeared to be another hack after Tunsil was chosen, with an image going up on his Instagram account showing a text message conversation, allegedly between Ole Miss assistant athletic director John Miller and Tunsil, about paying rent and electric bills for Tunsil's mother. Tunsil's Instagram account was deleted a short time later.

The Dolphins did an extensive background check on Tunsil during the predraft process and said he was the No. 2 overall player on their board. According to the team, Tunsil was very forthright about all of his transgressions during its communication, and that helped Miami make the final decision to select him with the No. 13 pick.

ESPN's Mark Schlabach and Edward Aschoff contributed to this report.