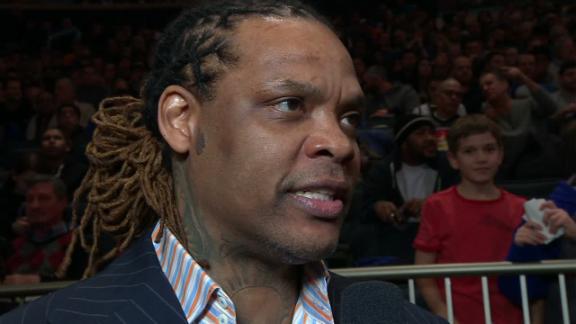 Sprewell and Dolan had long been at odds. Sprewell, who helped lead the Knicks to the Finals in 1999, screamed obscenities at Dolan in his first game back at the arena in 2003, following a trade from the Knicks to the Minnesota Timberwolves, leading to their icy relationship.He was fined $25,00 for the incident.

"I can't tell you why I haven't been back here, but I'll tell you when I left, I was not happy," Sprewell said to ABC. "New York is like a second home for me. I love the fans here. The fans have embraced me. There's no place like the Garden to play in. I mean, who wouldn't want to play in the Garden?"

A Knicks official had been discussing a potential reunion with Sprewell for months but the timing of his appearance coming so close to the Oakley incident appeared not to be coincidental. Dolan's handling of the Oakley incident, including the suggestion that Oakley had a drinking problem, had drawn wide criticism.

Dolan on Sunday was flanked by other ex-Knicks, with Bernard King to his left and Sprewell to his right. Ex-Knick Larry Johnson was sitting next to Sprewell. Johnson, a Knicks employee, told the New York Daily News that he was conflicted about attending Sunday's game after Oakley's arrest on Wednesday.

In total, nine former Knicks attended the club's win over the Spurs.A team official acknowledged that the ex-players attended to show that the organization supports its former players in the wake of the Oakley incident, as Dolan claimed in interviews after Oakley's arrest.

The biggest name to return was Sprewell, given his rocky history with the organization and Dolan.

The club played a video tribute to Sprewell on the Jumbotron in the first quarter, which was greeted with cheers.Sprewell was traded to Minnesota in 2003, ending a rocky final chapter with the franchise that included Sprewell showing up to training camp with a broken pinkie and not being forthcoming about the injury.

"I'm just happy to be back now," said Sprewell, who got a warm reception from the fans Sunday. "A guy named Jonathan [Supranowitz, Knicks vice president of public relations], I've kept in touch with him over the years and he worked his magic and he was able to pull some strings and get me back."

Dolan led Sprewell and the other ex-Knicks into the team's locker room after the win. Johnson, a Knicks employee who told the New York Daily News that he was conflicted about coming to work after the Oakley incident, addressed the team.

Meanwhile, Oakley, a favorite among the fans, remains banned from the Garden. Dolan announced that Oakley was banned indefinitely two days after his arrest. The owner suggested in multiple media interviews that Oakley has a drinking problem, which Oakley denied on Saturday in an interview with the New York Post.

Asked about the Oakley incident on the ABC broadcast, Sprewell called it "disappointing" and "unfortunate."

"No one wants to see anything like that," Sprewell said. "Not just for New York, but for the NBA family. Hopefully it will be something that everybody can just somehow iron out and get past."

Knicks fans peppered the arena on Friday with chants of "We want Oakley" and "Free Charles Oakley." Dolan said that the organization ejected Oakley because he was being verbally abusive to security. Oakley was charged with three misdemeanor counts of assault for striking Madison Square Garden security and one misdemeanor charge of trespassing.