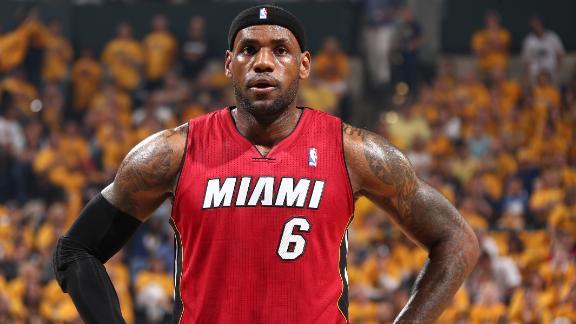 LeBron James and Dwyane Wade flew back to Miami on Thursday night after the Miami Heat free agents had spent the day at the LeBron James Skills Academy in Las Vegas.

James, who had been at the camp for most of the week, then was planning to fly from Miami to Brazil for Sunday's World Cup final. His flights from Las Vegas to Miami and then Brazil had been planned for more than a month, a source told ESPN The Magazine's Chris Broussard.

The trip back to Miami should not be read as a sign of James' decision on where he'll play next season, a source told Broussard.

Video aired by WPLG-Miami showed James and Wade after their arrival late Thursday standing by a charter plane talking for several minutes before shaking hands, hugging and getting into a van.

Earlier Thursday, James was joined at his skills academy for the nation's top high school and college players by Wade, his Heat teammate of four years. The two were spotted there chatting and watching a pickup game together.

It was the first known face-to-face meeting James has held since officially becoming a free agent July 1. James' agent met or spoke with officials from the Mavericks, Rockets, Suns, Cavaliers and Lakers last week, but James was not present.

James and Paul are done meeting with teams for now, sources close to the situation told ESPN.com.

The four-time league MVP will take time to talk with his family before making his free-agency choice, the sources said. There is no timetable for his decision, but with him planning to attend the World Cup final, one before then seems likely.

The mere prospect of an announcement has created a buzz seemingly throughout the country.

In Bath Township, Ohio, on Thursday, cars lined the streets near James' 30,000-square-foot mansion in anticipation of a decision. People posed for photographs, and TV news crews did remote reports from the driveway of his offseason home.

ESPN.com's Ramona Shelburne and Brian Windhorst and The Associated Press contributed to this report.

LeBron's Motivation
Dan Le Batard discusses LeBron James' impact, power and message to the league, where he will sign, and his top priority in deciding where to sign.