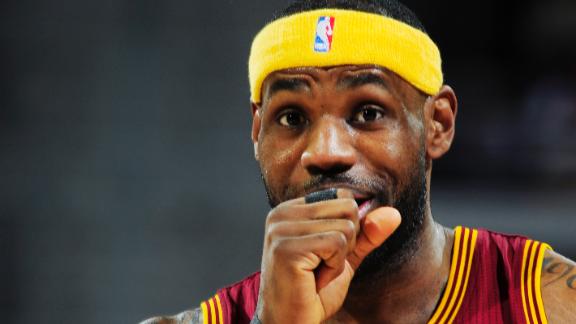 AUBURN HILLS, Mich. -- LeBron James became the most prolific passing forward in league history on Tuesday, topping Hall of Famer Scottie Pippen for the most career assists by an NBA forward during the Cleveland Cavaliers' 102-93 win over the Detroit Pistons.

James' pass that led to a Kevin Love 3-pointer with 6:26 remaining in the second quarter gave James five assists on the night and 6,136 for his career, passing Pippen's mark of 6,135. James finished the night with a game-high 11 assists.

The accomplishment comes on the heels of James passing Allen Iversonfor No. 22 on the NBA's all-time scoring list Sunday in a win over the New York Knicks.

"It means way more than what I did passing Allen Iverson on Sunday," James said. "I've always took a lot of pride and I get more of a rush seeing my teammates succeed more than myself. And that's what an assist is all about. I was taught the game the right way and seeing my teammates succeed has always been something that I've cared about more than anything and that's what it's all about."

James grew up watching the Chicago Bulls in their heyday and wears No. 23 because of Michael Jordan. But he was also influenced by Pippen.

"When I started to shape my game, I kind of knew that that point forward was something that was going to be my trademark," James said. "Obviously I looked up to Michael Jordan, that's someone that gave me a lot of inspiration, but as a kid I never thought that I could get to that point. You know, Jordan just felt so surreal. Pippen and Anfernee Hardaway and Allen Iverson was those guys that I kind of really, really thought that I could be. Because MJ just felt like you could never catch him as a kid. I always just felt like he was so far in the distance."

After the game, James took to social media to revel in the feat.

Cavs coach David Blatt was in awe of James' achievement.

"That's a fabulous accomplishment if you ask me," Blatt said. "He just turned 30. He's only 30 years old and to set a record like that speaks volumes to the kind of player he is. And to his level of greatness and his ability to make others around him great. That's so impressive. I didn't even recognize that was happening tonight."

"The assists thing is obviously probably one of the greatest achievements I've had in my career," James said. "Obviously, winning a championship (also), for sure. Like I said, the assists for me is something that's very cool, it's something that's always kind of driven me out on the basketball floor. And seeing my guys succeed and to know the category I was in with (players) like (Larry) Bird and Pippen, it's huge."