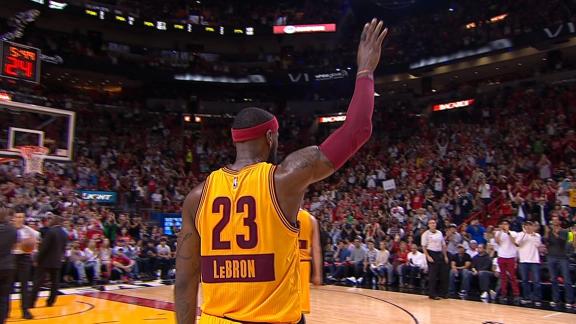 MIAMI --LeBron James might not feel the need to publicly thank Heat fans for the four years he spent playing for their team, but that didn't stop the fans for thanking him with a standing ovation before Thursday's 101-91 loss at Miami.

James was the first Cleveland Cavaliers player introduced by the Miami P.A. announcer and the majority of the crowd cheered for the four-time MVP.

"It's tough to play under these circumstances, man," James said afterward. "You're so used to playing regular-season games, and then you have to play one like this. Or my first home game, when I went back home (this season), my first home game. So, it's very difficult."

Once the game began, fans would boo when James touched the ball, but they went back to cheering when a tribute video for James was shown during a timeout with 5:44 remaining in the first quarter.

The video was an all-encompassing look at James' four years in Miami, from on-court highlights, to clips from the postgame interview antics that he, Chris Bosh and Dwyane Wade became known for, to James' charity work, to even glimpses of James' Nike commercials and the Heat team's "Harlem Shake" locker room dance that went viral.

"It's cool," James said of the video tribute. "A lot of emotions come back and you know, I spent four years here with those guys, man and some guys are still here, some guys are not here. We put in a lot of hard work and dedication just to do the best we could."

The crowd broke out into a loud standing ovation and James acknowledged the applause, raising his right arm to wave as he walked back onto the court from the bench following the timeout.

"I think these fans are great," James said. "I always talked about them and always said that and they always showed their loyalty."

Heat president Pat Riley stayed in his seat after the James video, but tellingly stood to clap following a highlight video for James Jones, who was also returning to Miami for his first game with the Cavs after playing for the Heat the last six seasons, shown later in the first quarter.

"You want to look past all that stuff but I don't think you can," Cavs coach David Blatt said. "I mean, the guy was an enormous figure here and was part of a great run and was obviously an MVP player and had championship seasons. There's going to be emotion. And there's going to be a lot of feeling and a lot of excitement.

"You can't just look past that because you want to. That's going to happen. So you try to roll with it and you try to over time just work your way through it. I thought he handled it well. I didn't think that he had a particular problem with it. I just think we all could have played better, that's all."

Before the game, James was asked what he would say to the Heat fans who expected a public thank you from him after he returned to Cleveland as a free agent this summer.

"I gave everything and more to this city when I was here," James said. "I never disrespected this city or the franchise or any of my teammates. (I did) everything as a professional and I gave it all. That's all I can do."

When asked by a reporter the one thing he "had to do" upon returning to Miami, James said it was spending Christmas Eve catching up with Wade.

James spoke about the special relationship he had with all of his former teammates.

"I just had some butterflies coming in," James said. "I played some great basketball here with me and my teammates. I miss my teammates more than anything. The camaraderie we had and the guys that are still here and the guys that's not even here like Shane (Battier) and Ray (Allen) -- well I still have Mike (Miller) with me and J.J. (Jones) -- all the guys, we built something that will last forever."

James later took to Instagram to talk about the relationship he still shares with Wade.

Apparently whatever he and Riley built wasn't as strong. James said he hadn't spoken to Riley in the days leading up to his return.

"If that opportunity presents itself, I don't mind," James said. "But I don't know what his mindset is."

James was asked where things stand between him and the Heat organization some five months after he left South Beach for Northeast Ohio.

"I don't know," James said. "I moved to another organization. So, my relationship is probably where it stood before. But if not then I don't mind it as well. I'm here in Cleveland, I'm back home and I'm feeling good."

He was asked if he thought the Heat would ever retire his No. 6 along with Alonzo Mourning's No. 33 and Tim Hardaway's No. 10 at AmericanAirlines Arena.

"It don't matter," James said. "That's an organization thing. If they feel like I did enough to be a part in the rafters as far as my jersey being retired, I'll be here when they put it up. If not, I'll be home."

As for the spectacle of returning as a visiting player, James said that using the opponent's locker room was no big deal because he did that his first seven seasons in the league. He did admit to feeling "weird" entering the arena from the opposite side of the Heat players' parking lot however.

Did the occasion of being back in Miami make James wonder what would have happened if he never left?

"I can't do that anymore," James said. "I can't live in the past or live with regrets. I got to live in the future or live in the present moment. And, I don't know. What do you guys want from me? I go out and play the game of basketball at a high level no matter what uniform I'm in, no matter what city I'm in ... For now just try to appreciate what I do on the floor."

LeBron Cheered In Return To Miami
In his first game back in Miami since joining Cleveland in the offseason, LeBron James was greeted by mostly cheers from Heat fans.