LeBron James admits to 'off game' in Game 1, plans to change mindset 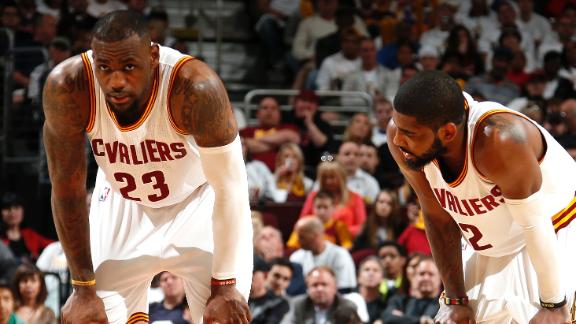 ESPN
By Brian Windhorst
CLEVELAND -- Cavaliers coach David Blatt tried to take some pressure off LeBron James on Tuesday. Then James pulled it right back on his shoulders.

"It's not fair to put everything on one guy," Blatt said Tuesday. "Teams win and lose games and everyone has to give a little bit more. Our margin of error is smaller and we've got to make up for that with 48 minutes of multiple effort and that's on the part of everyone."

James scored 19 points and had 15 rebounds and nine assists in the Chicago Bulls' 97-92 Game 1 victory. But he had six turnovers and was held to just seven points in the second half, missing eight of his 11 shots. The stat sheet may not have shown it was a substandard performance, but without the injured Kevin Love and the suspended J.R. Smith it was not enough.

Despite Blatt's feelings, James said he wanted the responsibility.

"I did have an off game," James said. "If I have a great game my numbers will be a lot different. For me that's an off game just from the standpoint [that] I'm a very efficient player as far as my shooting and to be 9-of-22, that's unacceptable. What everybody else says, I don't really care what everybody else thinks."

While the Cavs studied changes to their defense that contributed to the Bulls' shooting 56 percent through three quarters and allowing 22-of-26 shooting on open looks that came from half-court offense, James said he personally needed to make an adjustment.

After taking only two shots in the game's first 10 minutes and seeing the Cavs fall down 14 points to an early Bulls onslaught, James hinted at a change in mindset for Wednesday night.

"I've always had to feel out things, but last night it was a little bit too much feel out," James said. "I think I may have to change my mindset a little bit obviously with [Love] being out. It's something we all haven't been accustomed to this year with him being out for an extensive period or another of the Big Three being out for a long period of time since I had my injuries."

In his 10-year playoff career with the Cavs and Miami Heat, James has led a team back from being down 1-0 in a series to win four times. He's done it twice against the Bulls. He stopped short of calling Game 2 a must win but made it clear he feels a sense of urgency.

"You can't go down 0-2 on your home floor going on the road," James said. "So it's going to be a tough challenge."