LeBron James gets stitches, has 'slight headache' after cameraman collision 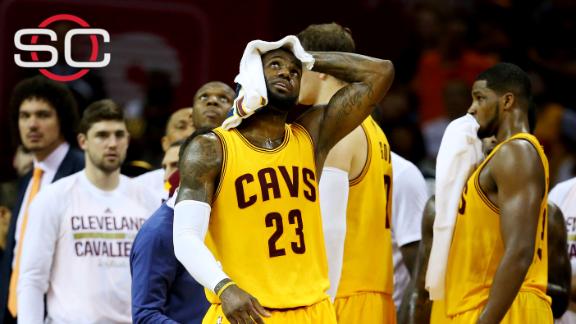 CLEVELAND -- LeBron James suffered a bloody gash on his head Thursday night after colliding with a cameraman late in the second quarter in Game 4 of the NBA Finals.

With 4:43 left in the second quarter, James drove to the basket and was fouled by Golden State Warriors center Andrew Bogut. James hit the deck, and his head collided with the camera of Peter Winik of NBA Entertainment.

James lay on the court for a few minutes as teammates and Cleveland Cavaliers staffers surrounded him.

"I was just trying to regain my composure, and I was holding my head. It was hurting," James said after Cleveland's 103-82 loss. "I was just hoping I wasn't bleeding. But obviously the camera cut me pretty bad. Our medical staff did a great job of stopping the bleeding."

He placed a towel on the back of his head, behind his right ear, and quickly returned to shoot two free throws. The injury didn't affect his playing time, and he finished with 20 points on 7-for-22 shooting, 12 rebounds and eight assists in 41 minutes.

"I knew I had to shoot the free throws or I wasn't going to be able to come back into the game, so it didn't matter what was going on with my head at that point in time," he said. "I had to go up there and shoot those free throws and continue to play."

James said in an interview with ESPN at halftime that the wound had been closed up by "glue" and he wouldn't need stitches, but he revised that postgame, saying he did receive stitches while declining to reveal how many.

"Obviously, you can't see them," said James, who was wearing a black hat.

The Cavs star also said he didn't go through the concussion protocol after hitting his head.

"No, I didn't have to go through any concussion protocol. I had a slight headache, which I think every last one of you guys would probably have if you ran into a camera. You might have a little bit more than that," he said. "But I didn't go through any protocol. I'm fine. Like I said, I got a few stitches and I got a little slight headache right now, but I'll be fine with that."

A Cavaliers official said the league's concussion protocol is initiated only if there is a change in a player's mental status and that in James' case, there was no change.

"I hope he's OK. I don't think he has any kind of [concussion]. He didn't have like a serious hit to the head. It was more of a cut, obviously. I'm sure he's fine, knowing him," Cavs coach David Blatt said.

ESPN anchor Sage Steele asked NBA commissioner Adam Silver during halftime why James did not need to go to the back for further testing.

"If he stops bleeding, he doesn't have to come out of the game," Silver said. "It seemed to be a surface cut. He seemed to be fine. He hit a free throw and stayed in the game."

A league spokesman clarified after the game that Silver's response was about infection control, not concussion protocol.

Bogut told reporters in the locker room that James "jumped into the cameraman."

Winik, the cameraman, told ESPN at halftime that he felt fine after the collision, that the collision wasn't too bad in general and that he didn't have to clean any blood off his camera.

Winik, smiling and in good spirits, declined to answer any further questions, saying he was in "game mode."

How close cameramen are to the court has been an issue for player safety reasons.

A league spokesman said the league has reduced the number of cameramen over the past five years from as many as 10 or 11 per quadrant to almost half that now.

Information from ESPN's Doris Burke and ESPN.com senior writer Marc Stein was used in this report.