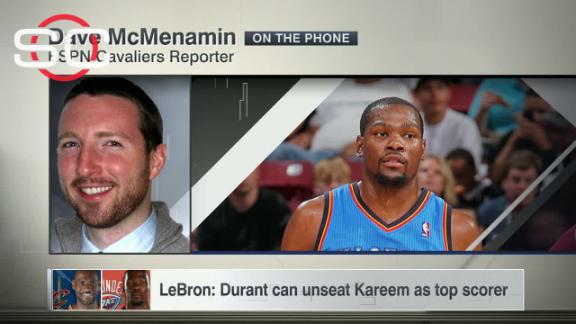 INDEPENDENCE, Ohio -- The way LeBron James sees it, Kevin Durant's skill set and physical talents make for an unprecedented combination in the 70-year history of the NBA.

"He's a 7-footer with 6-foot ballhandling skills and a jump shot," James said after a Cleveland Cavaliers shootaround Thursday morning in preparation for a game against Durant's Oklahoma City Thunder on Thursday night. "And athleticism. It's never been done in our league. Never had a guy that's 7 foot, can jump like that, can shoot like that, handle the ball like that. So it sets him apart."

Durant is officially listed at 6-9 but does have a 7-4 wingspan. The nine-year veteran's ballhandling was honed by his experience as a point guard in his youth before an 8-inch growth spurt after his sophomore year of high school moved his primary position to the wing.

The Thunder star is the league's third-leading scorer at 27.3 points per game this season. James is right behind him in fourth at 26.3.

They are even closer when it comes to all-time scoring average, with James' 27.32 points per game ranking fourth and Durant's 27.31 fifth.

James said Durant could have a chance to unseat Kareem Abdul-Jabbar as the game's all-time leading scorer by the end of his career.

"His ability to score the ball is obviously up there with the greatest to ever play," James said. "I know that's not in his memory bank right now, him trying to help the team get better and better, but long term he definitely can challenge that."

James missed one of the marquee matchups against Durant last season, sitting out because of an injury. Does he relish any chance he gets to face Durant?

"You guys know me -- I've always loved playing against the best, the best guys in our league, but it's never about that," James said. "That's more of a fan perspective. Fans like to see those matchups. I mean, I like to compete against the best teams, and they're one of the best teams. That's what means more to me than anything."

Cleveland enters the game riding a three-game winning streak, while Oklahoma City has won six straight. But while the Thunder will be at full strength, the Cavs will be without Kyrie Irving (left knee) and Iman Shumpert (right groin strain) and could be without Mo Williams, who is considered questionable after spraining his right thumb Tuesday.

While Shumpert was ruled out, the team did not provide any further timetable for his return moving forward other than listing the fifth-year guard as questionable.

"I mean, it's hard to get a fair assessment of how good you can go up against a team when you're missing a key component of your team," James said of the Cavs' playing the Thunder. "At the same time, right now our mission is to continue to get better no matter who's in the lineup, and we're looking forward to doing that tonight, even with two of our main guys [Irving and Shumpert] being out again."