LeBron James: 'I haven't thought about' Finals rematch with Warriors 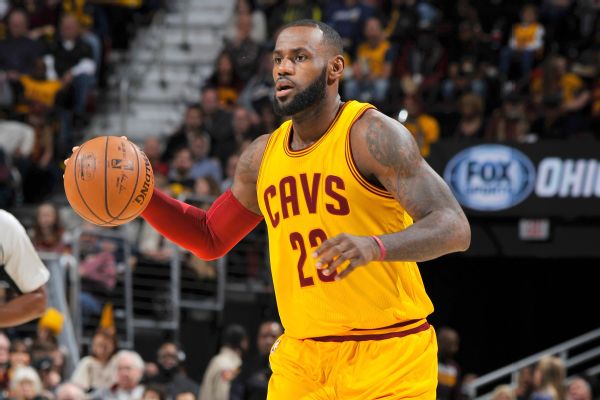 INDEPENDENCE, Ohio -- While many NBA fans, the television networks that carry NBA games and league executives might be rooting for a Finals rematch between the Cleveland Cavaliers and Golden State Warriors, LeBron James says the thought of a third straight showdown with Golden State isn't on his mind at all.

James was asked about the potential rubber match after Cleveland guard Iman Shumpert told Complex, in an interview published this week, that the Cavs not only want to play the Warriors, but that they will do some damage when they do.

The Cavs will get their first look at the revamped Warriors since their epic Game 7 win in a little less than a month, when they host Kevin Durant and Co. on Christmas Day. Getting excited for that game is one thing; making plans for June when there are still more than 60 regular-season games left to play is another.

"I have zero entitlement on this journey," James continued. "It's always a process for me. The Warriors are a great team. They assembled great players in Draymond [Green] and Klay [Thompson] and Steph [Curry] and KD and the rest of those guys, and obviously they have a great coach in Steve Kerr, but it would be foolish of me and disrespectful to myself, to my teammates and to the rest of the competition to just put ourselves in a third matchup with them. And I haven't even fantasized about it. I haven't thought about it. It's too long of a season.

"It's too much work to be done for me to put myself in that mind frame. But they're a great team. We're a team that wants to get better every day and become a great team as well. So, we'll see what happens. But I haven't even thought about it at all."

Green started the round of trash talk by recently telling NBA.com's David Aldridge, "If Cleveland comes out of the East, I want to destroy Cleveland. No ifs, ands and buts about it. But I also know that there's steps to get to that point. And if and when we get to that point, I want to annihilate them."

Golden State currently has the best record in the league at 16-2; Cleveland has the second best at 13-3.