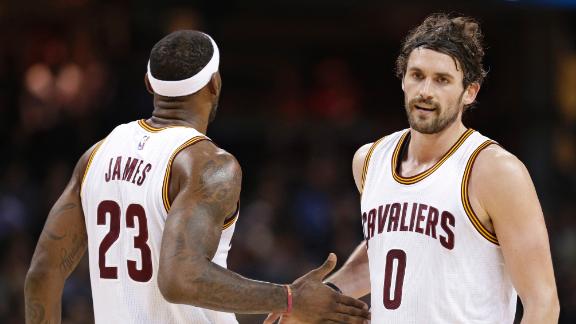 CLEVELAND -- LeBron James joined Hall of Famer Oscar Robertson on Monday as the only players in NBA history to rank in the top 25 in both points and assists.

James joined the elite company when he found Kevin Love for a corner 3-pointer with five minutes left in the second quarter. It was his fifth assist of the game and 6,387th of his career, which put him ahead of Norm Nixon at No. 25.

James said he didn't want the accomplishment to spark a conversation comparing his career with the Big O's.

"I think what we get caught up in, in our league too much, is trying to compare greats to greats, instead of just accepting and acknowledging and saying, 'Wow, these are just great players,'" James said after the Cleveland Cavaliers' 117-103 win over the Orlando Magic. "I think in the NFL, when you talk about great quarterbacks, they don't really compare great quarterbacks. They say, 'Oh, Joe Montana is great.' You know, 'Tom Brady is great. Aaron Rodgers is great. Steve Young is great.' [Terry] Bradshaw, all those great quarterbacks, they never compare them as much.

"But when it comes to our sport, we're so eager to say, 'Who is better: Oscar or [Michael] Jordan?' or 'Jordan or LeBron orKobe [Bryant]or these guys?' instead of just accepting greatness. And if you understand the history of the sport, then there is no way you could ever forget Oscar Robertson.This guy, he averaged a triple-double for, like, forever."

In October 2010, speaking in an interview with ESPN's Mark Schwarz, Robertson said James is "in a class by himself" in response to Charles Barkleysaying James will "never be Jordan."

"I think it may be the nature of the sport, and also, the prestige position in sports is quarterback," James said.

James was then asked if basketball players feed into those comparisons by having the conversations he doesn't care for.

Magic coach Scott Skiles brought up other luminaries to whom James has been linked.

"Every time there is a great young player, everybody always talks about Michael [Jordan] and stuff like that, but to me, he's always been more of like a Magic [Johnson] or an Oscar-type player, anyway, because of his vision," said Skiles, the NBA's all-time single-game assists leader, with 30. "That's what makes him so difficult [to defend]. ... Give him a steady diet of running and double-teaming him or whatever, he's going to carve you up. He's going to hit everybody [with passes], find everybody, find the open man. ... His vision certainly sets him apart from a lot of the great players."

James finished Monday night's win with 13 assists, which tied a season high. He scored 15 points and needs just six more to pass Reggie Miller (25,279 points) for No. 18 on the all-time scoring list.

When asked at shootaround Monday whether he had any fond memories of Miller's playing career, James said, "Uh, no," rather abruptly. When Robertson's name came up, James was more than happy to expound.

"Any time we get an opportunity to either see each other or talk to each other, it's always respect," James said. "He's a guy who laid the foundation, and I'm just trying to carry it on. How guys can be triple threats, play for the team first, and then hopefully, someone else can take the example that I took from him and keep it going."

James -- sometimes reluctant to delve into his personal achievements, often going back to the refrain that he and his good friend, Maverick Carter, will talk about all that over wine someday when he's retired -- gave credit for the mark to those he has suited up with on the Cavs and Miami Heat.

"I've been very blessed to be with a lot of great teammates and two great organizations that allowed me to do some unbelievable things," James said. "And obviously with the assists, without my teammates over the years and them making shots, then I don't get the assists. So it is very humbling to see my name linked with Big O, someone that I've always kind of admired."

James' team gave the credit right back to him.

"That gives me chills to even hear that," Cavs coach David Blatt said. "That's an amazing, amazing accomplishment."

Added Love, who informed James he had joined Robertson: "One of, if not the, most unselfish superstar, best player in the game, and it doesn't surprise me. ... The scoring has always been there for him, but he's, by nature, unselfish. That's pretty good company."

James entered Monday night averaging 26.6 points per game. If he can stay at that clip while playing all 82 games for the Cavs, which he has said is his goal, he could pass Hakeem Olajuwon's 26,946 points, which currently rank 10th all time, by season's end.